Kinsey is using Smore newsletters to spread the word online.

Get email updates from Kinsey:

How to catch a Leprechaun

How to catch a Leprechaun

My Hypothesis over this cage is that it will work. The cage will drop where it's suppose to and should catch the leprechaun, and trap it in there.

How to Build your leprehcaun trap

Start by finding a pretty big box from around your house. Then tape popsicle sticks around the outside of it. On the front you need to make sure to build a door and glue two small hinges on the front. Then screw your door on with your hinges. After that glue 3 sets of 3 popsicle sticks on the bottom of it. Next build a ladder/ramp on the front of the door. Next spray paint silver glitter paint on the whole outside. Then glue a couple of pennies, lucky charms, and rolos on the ladder. On the inside get a little top hat and cut out the top of it. Once you've did this put pennies and a light up bracelet in the hat. Next put a big pile of lucky charms and rolos leading to the leprechaun hat. The final step is to tape two signs on the front by the door. One says do not open and the says do not grab the pot of gold.

How the leprechaun trap works

The trap starts with a string attached to the door and then underneath of the box the string goes. After that their will be a huge pot of gold. Here the leprechaun will grab it and start dragging it away, but when he drags it the door will fall and get stuck on the velcro that is on the bottom and top of the door.

At the end of my project my original thought process of how I wanted to make it didn't really change. I did add a couple of things that I wasn't planning on putting in it. Like the gold walls and the trail of pennies, but otherwise my original though process was the same. 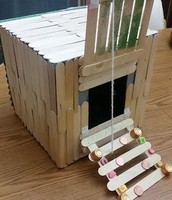 Kinsey is using Smore newsletters to spread the word online.