This is a picture of where fossil fuels are found.

Gasoline, fuel oil, diesel, and kerosene are all made from petroleum.

Electric power plants burn around 90% of the coal that is used in the U.S. Coal is also used to heat buildings and make steel and concrete.

Around half of all of the homes in the U.S. use natural gas for heating. Electric power plants burn about 30% of natural gas in the U.S. Burning creates less pollution than burning other fossil fuels.

1 6 Fossil Fuels with Bill Nye
This video is all about fossil fuels and where and how they are found. 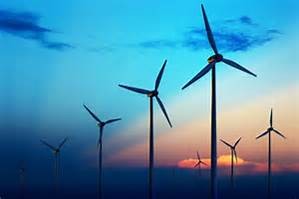 This is a picture of wind turbines.
Wind energy is an inexhaustible energy resource. Modern wind turbines convert kinetic energy in the wind to electric energy. The wind spins a propeller that is connected to the electric generator.

Wind turbines create no pollution in the air or water. But wind turbines can only be created where the average speed 5 m/s or more. Wind turbines cover large areas of land needed to obtain as much electric energy as one fossil fuel- burning power plant.

Energy 101: Wind Turbines
This video is all about wind turbines and what they are made for.