OF MICE AND MEN

OF MICE AND MEN

salinas valley and the main characters are Two men Lennie and George walk down to a river to stop and get a drink and Lennie is mentally disabled and he goes up to a girl by grabbing her dress because he likes to feel things so he went up and felt this girls dress and the lady didn't know he was mentally challenged and thought that he was trying to do something inappropriate. 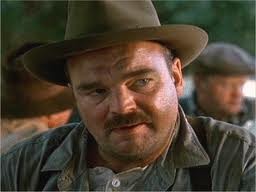 There are many characters in the book Of Mice and Men. George and Lennie are the main characters or the round characters. They both wore black shapeless hats and both carried thigh blanket rolls slung over their shoulders. " the first man was small and quick dark of face with restless with sharp strong features. every part of him was defined small strong features. That was a direct quote about George. Lennie was the opposite. "behind him stood a huge man, shapeless face with large pale eyes with wide sloping shoulders." "Slim was a nice tall mule skinner." curleys wife like a lot little guys. " This quote means that she likes to flirt with a lot of guys.

In John Steinbeck’s Of Mice and Men the actions of the characters show that the weak are often at the mercy of the strong. Later on crooks said , “S’pose George don’t come back no more. What’ll you do then”? (pg. 71)