We have been working with teachers to develop a plan to distribute materials to students that need them for specific classes during remote learning. Please know that if you need to pick-up a supply packet, your teacher will be communicating this with you through Canvas and during class Zoom meetings. 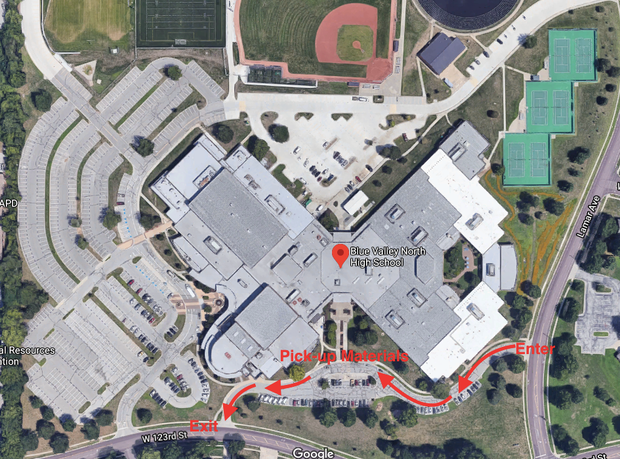 The schedule below is based on the student's last name and when they should plan on being at Blue Valley North to collect their materials. During these two days, students will be following the regular bell schedule. September 21st will be an ODD day, and September 22nd will be an EVEN day. Classes will include both synchronous and asynchronous activities for students. Teachers will be working with students on a case-by-case basis if they miss class due to the distribution day.

Again, if you have a conflict with your assigned time, please contact the main office at 913-239-3000 to make alternate arrangements.

Tips for the First Four Weeks of School

Students, it is important that you get in the habit of checking your school email frequently. We recommend checking it three times a day (morning, lunch, and the end of day). Thank you!

In place of our orientation day and back to school night, teachers and counselors made introductory videos for their students and parents. These videos are located on the teacher's/counselor's Canvas pages. These videos contain all of the information that students would receive during orientation, and parents would receive during back to school night. Please take a few minutes to sign-in to Canvas and view these videos.

Also, below is the PowerPoint presentation that was sent out on August 19th, highlighting the changes to Blue Valley North this year.

Juniors! Use this link to purchase your class shirt: https://forms.gle/KC6pswnX8CyNbWDm8 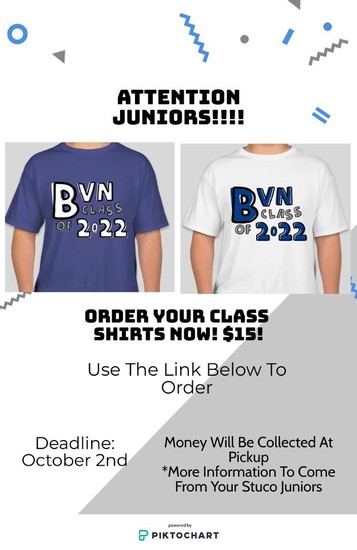 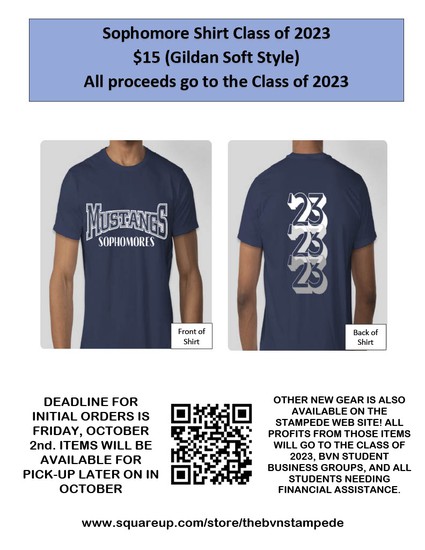 Click here for BVN's Counseling webpage to see info about:

My name is Lisa Summers and I am the Social Worker for Blue Valley North. I know it has been a difficult 6 months, both financially & emotionally, for families. I wanted to let families know we are here to help. BVN has a limited amount of funds to assist families. I am also available to assist families with resources in our area.

Programs that BVN offers include:

· Back Snack Program. Snacks will be distributed to students on a weekly basis.

Join the Mustang Community Service -KAY Club! We have an exciting fall community service project you can do from home. We are creating a read aloud library for K-2 students. Click this link to join the club. To learn more, come to our first meeting on Tuesday September 29th at 3:30pm at this Zoom link. Password is KAY. Questions? Contact Tanu, Club President, at tsakaray@bluevalleyk12.net

ALL NEW BOYS' AND GIRLS' SWIMMERS AND DIVERS

If you're a freshman or new to Blue Valley North and are interested in joining this year's swim and dive program, please email Coach Cole and let him know you're interested. He is also looking for student-athletes looking for a new sport to participate during Winter for Boys and Spring for Girls. Coach Cole is setting up zoom meetings and conditioning soon.

Are you a current Junior or Senior with a 3.5 GPA or higher? Are you interested in being a candidate for NHS induction in the fall? If so, please read on. Normally students need 40 hours of community service from January 1, 2020 through September 30, 2020. Due to Covid-19 we are going to lower the expectation to 20 hours with the understanding that in the spring of Junior year through senior year students will need to perform those 40 hours. These hours must come from non-profit organizations. We will not count hours such as walking dogs, babysitting a neighbor, helping someone move, tutoring, etc. Students should already be on x2VOL and should be recording and verifying hours on this online platform. An individual from the organization must approve hours with an email that is from a .org email address. There are plenty of opportunities to get hours virtually, or for summer outdoor opportunities. Look online for opportunities.

The initial information meeting is Wednesday September 30 and Thursday October 1, 2020 at 2:55pm. Attendance at one of these two dates is mandatory! These meetings will be held by ZOOM. Zoom login information is on x2VOL on the Bulletin Board. If students can’t find this information, they need to contact us ahead of time.

The Mustang Girls’ Tennis Team came out of the stable in a massive stampede with sweeping wins over Blue Valley West and Blue Valley Southwest in their first Tri-Match, on Monday, Sept. 14! The Varsity won 6-0 vs. both BVW and BVSW and was represented by: Callie Flanagan, Sophia Baillos, Divya Gupta, Christine O’Brien, Emme MacKenzie, Caroline Thummel, Emma Razi, Joy Yan, Cimone Trysla. The Junior Varsity also won big with a 6-0 win over BVSW and a 5-1 win over BVW! The JV was represented by: Natalie Swerdlow, Grace Summers, Clancy Scott, Ainsley Skomal, Nancy Di Palo, Avery Hammer, Brenna Coleman, Mandy Unterhalter, and Mary Crossland – All pictured below.

On Tuesday, Sept. 15, the Varsity faced Shawnee Mission East, Free State and Shawnee Mission South in their first ever Quad-Match! The Varsity won all three matches 4-0, bringing their season record to 5-0 in team competition. The varsity was represented by the same players as on Monday. The JV face-off against St. Thomas Aquinas and were also victorious. The JV played 14 singles matches and 7 doubles matches! The JV was represented by many of the players above but the new additions were: Paige Browning, Seline Ulusarac, Abby Gold, Meghan Coleman, Justyna Hayslett, Uma Bhoot, and Emery Skomal. 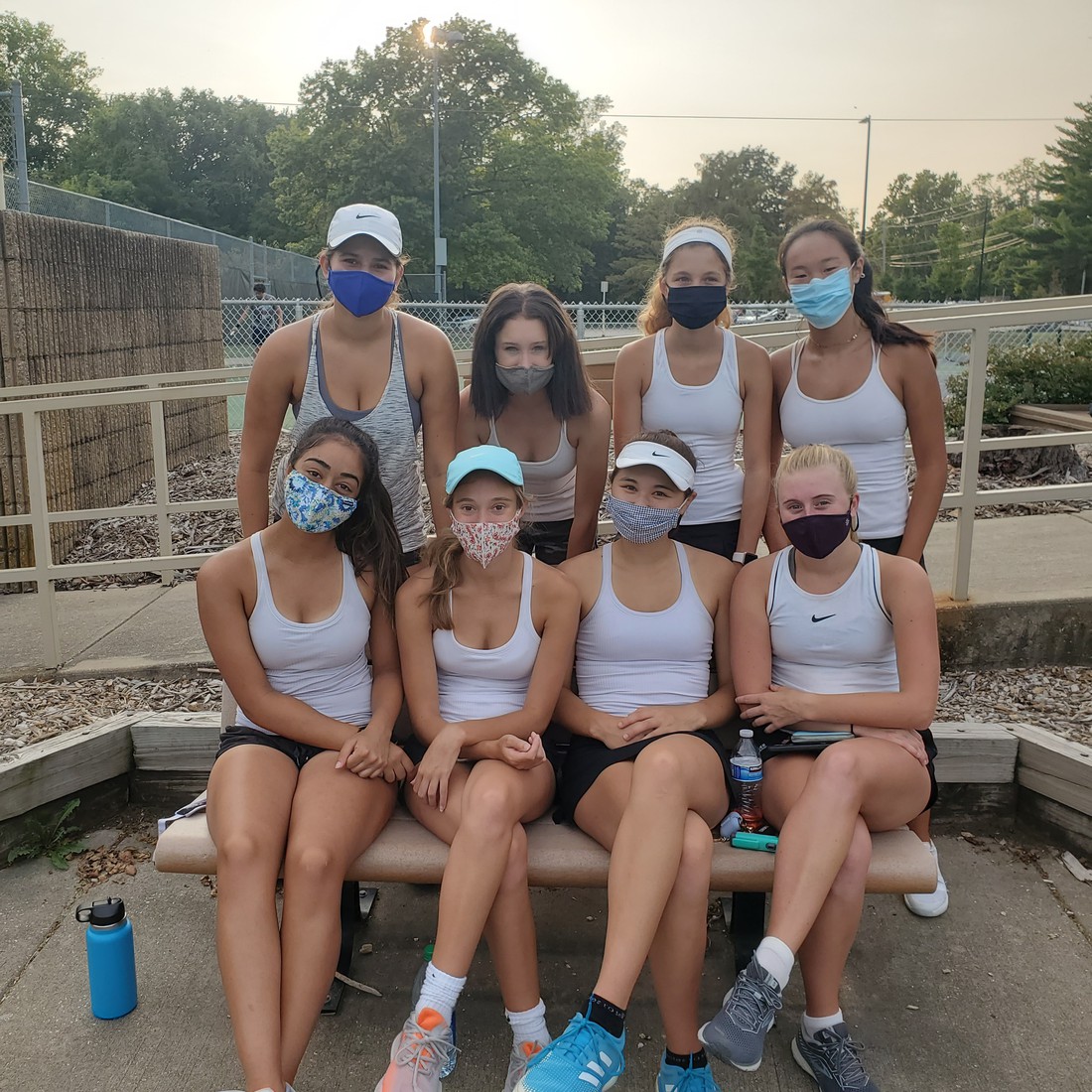 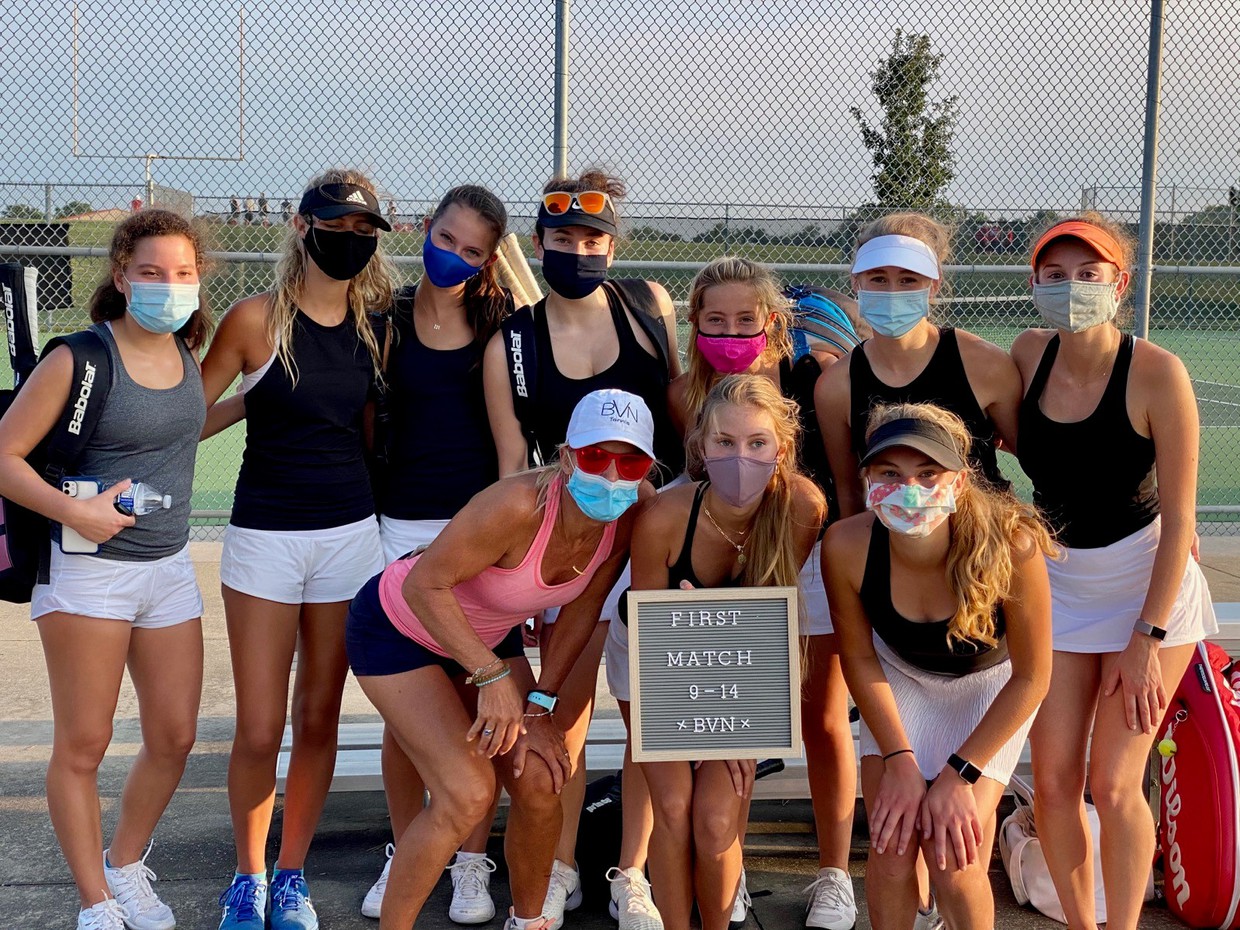 Congratulations to our students for their academic and athletic achievements!

Team Up For St. Jude KC

September is Childhood Cancer Awareness Month. Team Up For St. Jude KC BVN representatives and students tied gold ribbons around the school in honor of our childhood cancer survivors, those children and teens currently battling cancer, and for those who have left us too soon.

Even though Covid restrictions have altered September events, t-shirts and ribbons are still being sold in order to raise awareness and funds in the fight against pediatric cancer.

Donations can also be made at the following link:

If you’d like a t-shirt ($10) or ribbons tied around your trees, please contact one of the following representatives:

Mackenzie Meyer: BVN senior and Team Up board representative

Clara Taylor: BVN senior and Team Up board representative

Lars Yarkousky: BVN junior and Team Up board representative

Originating from a BVN student/family in 2016, BVN students continue to lead all metro high schools in this meaningful cause for the fifth year in a row. We are Mustang Proud!!! 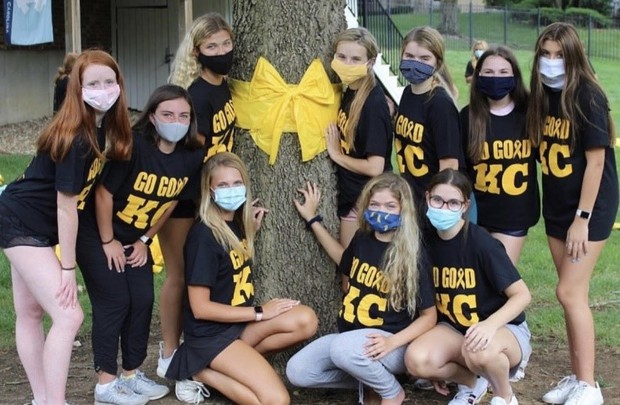 Speak Up Walk ~ Virtual Event ~ The Month of September

The Speak Up walk is virtual this year. For $15, a participant walks on their own with friends, family or pets and posts pics to #Speakupwalk2020 during the month of September. This coincides with September being suicide awareness month. If students are interested and want to be a part of TeamChad, the link is here: Team Chad. There is more information on the Team Chad Facebook page. In addition, here is Speak Up's video describing the virtual event. Thank you for your support!

Struggling with knowing how to help your kids have healthy screentime habits in the world of virtual learning? This 60-minute virtual event will help you make a game plan to manage screens at home. We'll share fresh, expert-informed concepts that can apply to all ages of kids, and give you an opportunity to exchange tips and offer support with other parents and staff in the Blue Valley North community. The content is designed for adults only; please note that some information might be disturbing for younger kids. You will walk away with practical ideas to help your child stay safe, sane and seen in an increasingly digital world. Can't join live? No worries! The event will be recorded and sent to registered parents to view at a time convenient for you. Registration is now open, click here to get started. 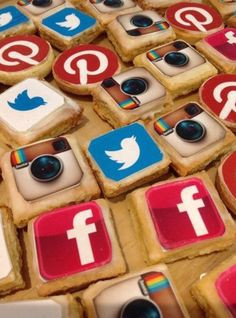 Blue Valley North High School now has official social media accounts, monitored by our very own BVN Administration Team. Please follow for announcements and information if you use these social media tools. Thanks for your support!

If your experiencing COVID-19 symptoms (Fever or chills, Cough, Shortness of breath or difficulty breathing, fatigue, muscle or body aches, headache, new loss of taste or smell, sore throat, congestion or runny nose, nausea or vomiting, diarrhea) or have been exposed to someone who is positive with COVID-19 and need a COVID-19 test, consult with your primary care provider or use the following resources to get a test:

Those who live or work in Johnson County, KS can schedule a free COVID-19 test at the Department of Health and Environment's Olathe location. Individuals should seek testing from their primary health care provider first before making an appointment. Supplies and appointment times are limited.

If you have any questions or concerns please feel free to e-mail Nurse Collichio, BVN Nurse, at ajcollichio@bluevalleyk12.org. or call at 913-239-3013. 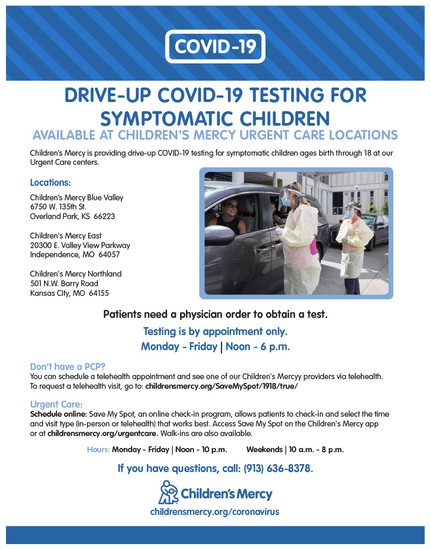 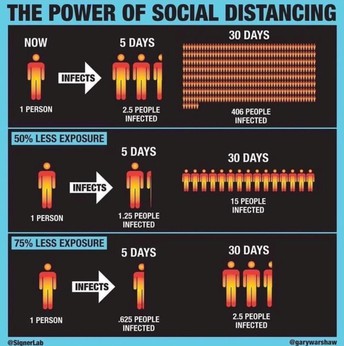 Stop the Spread of Coronavirus

Blue Valley wants families to know the district is carefully following the guidance of the Centers for Disease Control and local health agencies on preventative measures for the Coronavirus or COVID-19. One of the most important things we can do right now is practice preventative measures and remind students of everyday actions they can take to slow the spread of germs and prevent illness. We appreciate your encouragement of these healthy habits at home.

Thank you for your support to safeguard the health of our students, staff and community. More information on the Coronavirus is available at: https://www.cdc.gov/coronavirus. 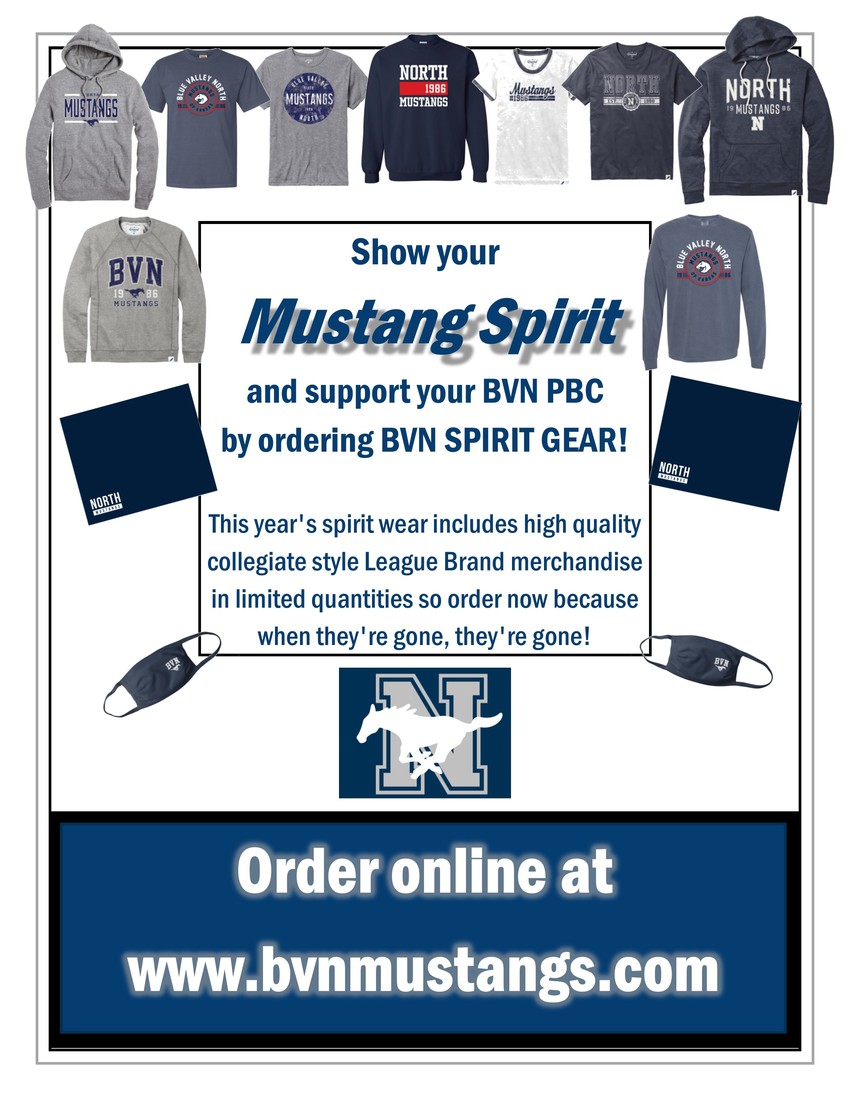 We are Mustang Proud!

North Notes is a newsletter for the parents and students of Blue Valley North High School. If you have questions, please contact Janet Roush, Assistant to the Principal, at JRoush@bluevalleyk12.org . Thank you! 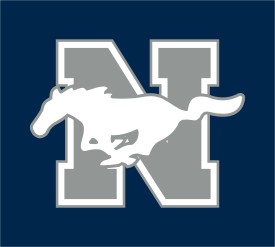