Ramanveer is using Smore newsletters to spread the word online.

Get email updates from Ramanveer: 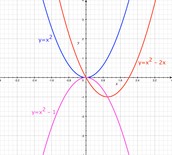 All About Vertex Form

The Axis of Symmetry and Optimal Value

All About Factored Form

All About Standard Form

Completing the Square to Turn to Vertex Form

Factoring to Turn to Factored Form

Non-linear relation: a relationship between two variables that does not follow a straight line when graphed.

Curve of best fit: a smooth curve drawn to approximate the general path or trend in a scatter plot.

Parabola: the graph of a quadratic relation, which is U-shaped and symmetrical

Axis of symmetry: the line that divides a figure into two congruent parts.

Zero: a value of x for which a relation has a value of 0. Corresponds to an x-intercept of the graph of the relation.

x-intercept: the x-coordinate of the point where a line or curve crosses the x-axis. At this point y=0

Perfect square trinomial: a trinomial that is the result of squaring a binomial.

Difference of squares: an expression that involves the subtraction of two squares. 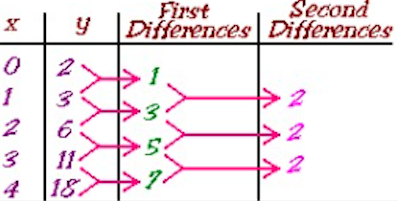 To graph parabolas you can use Desmos. It is a quick substitute to drawing a parabola onto graph paper. 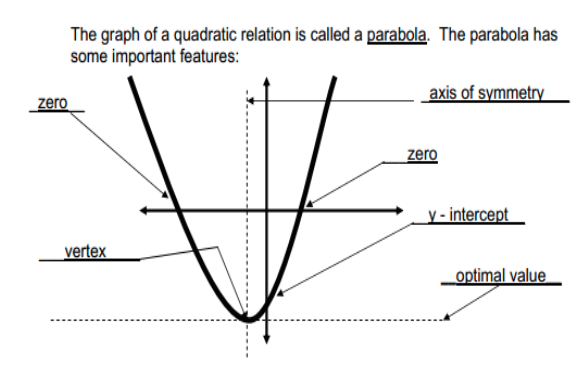 Below is a video I made, i think it helps you understand how to graph parabolas in a simple and fast way.
Graphing Parabolas

In order to really understand quadratics, how to make parabolas and how to convert forms you must know how to common factor properly. Factoring is a big part of quadratics. The video below will help you understand common factoring better.
Common Factors

If the a value is greater than zero the parabola opens up.

If the a value is less than zero the parabola opens down.

If the a value is zero the parabola is vertically compressed.

If the a value is greater or less than one the parabola is vertically stretched. 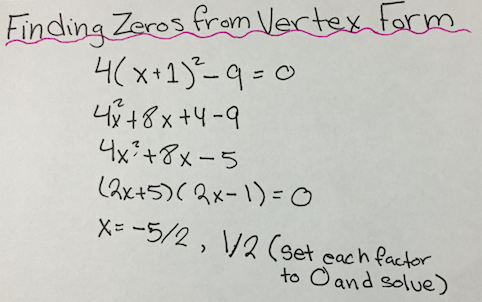 The step pattern is the rate at which the parabola goes up/down. 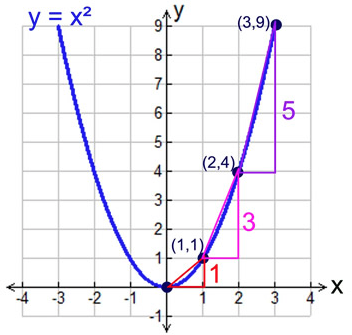 Below you can see how to find zeros, axis of symmetry and the optimal value. 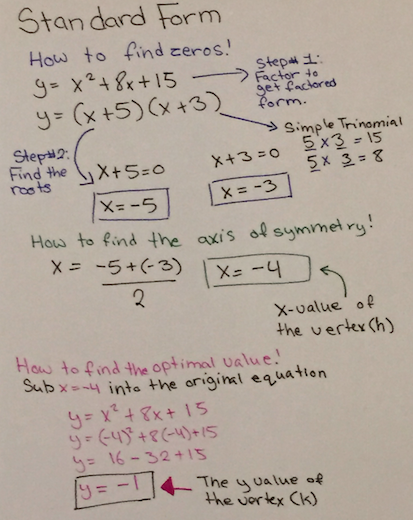 Below is the step by step process of completing a square. 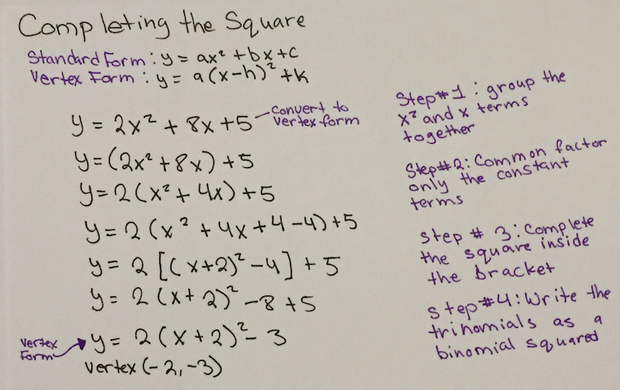 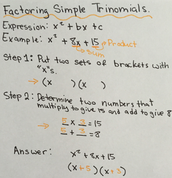 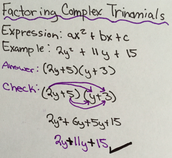 Perfect Squares and Difference of Squares
3.14 Summary of three forms

Here is the solution... 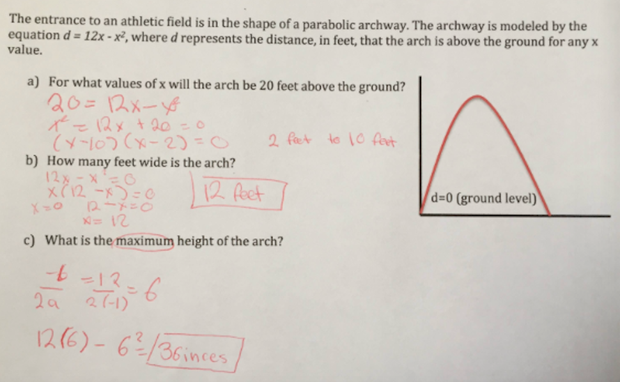 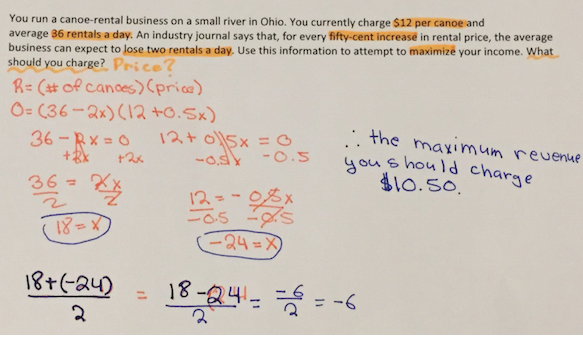 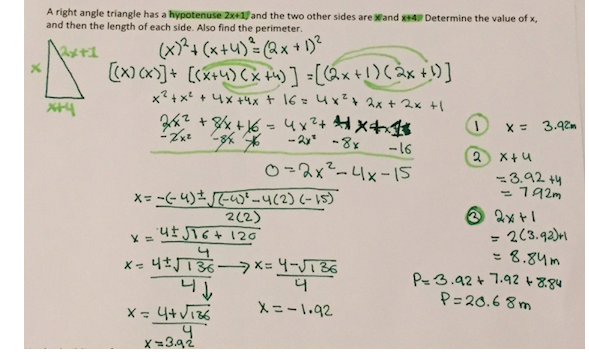 Everything we learned in the three units of quadratics tied together at the end. The three types of forms can be converted into each other. You really need to understand everything and how to put it together to be able to put things together. All forms can be graphed but you must know how to convert, and you should know the formulas. As you get further into this unit it gets more advanced but you may find shortcuts and easier ways to do a few equations.

This was the second mini test for quadratics. I did not do very well, i could have done much better. This test was definitely more difficult than the first mini test because the first one was mostly based on parabolas, and how to find everything in it. Whereas this test was based on mostly equations, expanding, simplifying, factoring and there were more word problems and the communication question was hard as well. The communication section is where i did the worst, when i got my test back i realized that it was straight from the homework. I know that i have improved on factoring and writing it in the correct form. 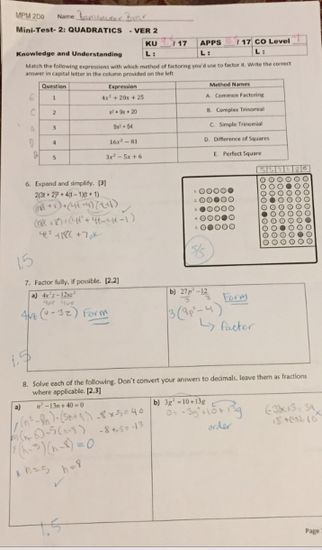 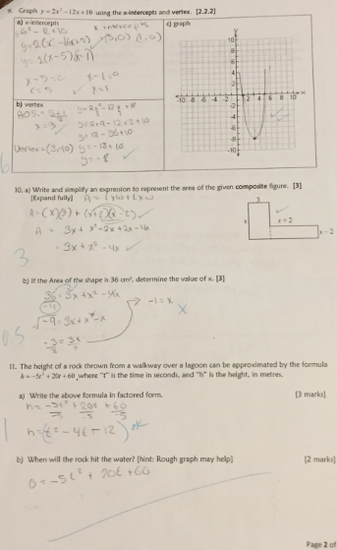 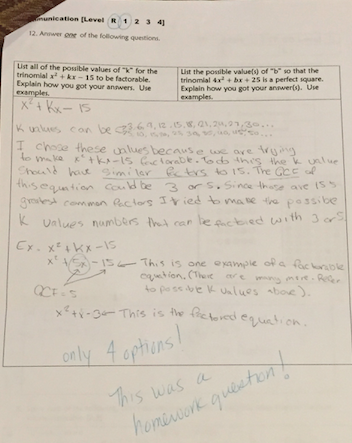 Ramanveer is using Smore newsletters to spread the word online.

Follow Ramanveer Brar
Contact Ramanveer Brar
Embed code is for website/blog and not email. To embed your newsletter in a Mass Notification System, click HERE to see how or reach out to support@smore.com