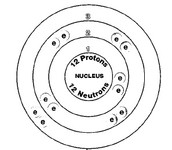 Magnesium has 12 protons and electrons and also has 12 neutrons

Magnesium is a chemical element with the symbol Mg and atomic number 12. Its common oxidation number is +2. It is an alkaline earth metal and the eighth-most-abundant element in the Earth's crust and ninth in the known universe as a whole. This element is not found naturally on Earth, as it is highly reactive though once produced it is coated in a thin layer of oxide which partly masks this reactivity.