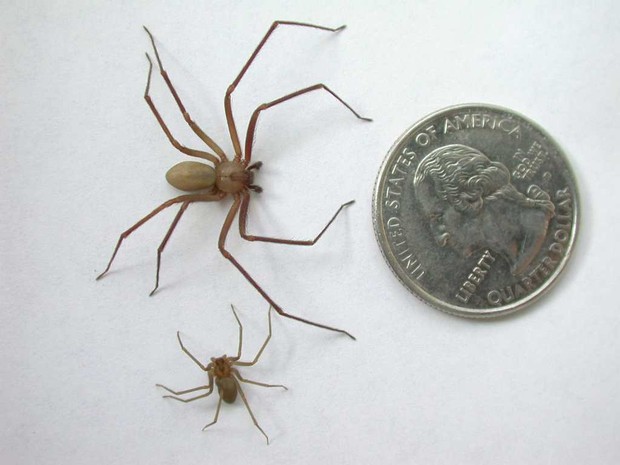 This is the Brown Recluse spider, formally known as Loxosceles reclusa.

The organism can be categorized by the following:

Others may know them as the Fiddlebacks, or the Violin Spider.

This spider gets its nicknames from the dark markings on its cephalothorax that resemble the shape of a fiddle or violin. It also has six eyes, unlike most spider. They are arranged into three sets of two eyes. The spider may not appear to have any hair as they are so fine, and is light brown in color. The legs are extremely skinny, so it makes the body appear bigger than what it actually is. The name "Loxosceles" literally translated to slanted legs which is in reference to the way the spider positions its legs when it is not in motion.

Brown Recluse spiders display bilateral symmetry and can be up to 1/2 inch long. It is ectothermic as well, meaning its internal temperature is depend on the temperature of its environment. The organism has segmented appendages; the legs. It also has two body segments; the cephlothorax and the abdomen. The Brown Recluse is very similar to many other spiders in terms of body plans, but its outward appearance and traits sets it apart. 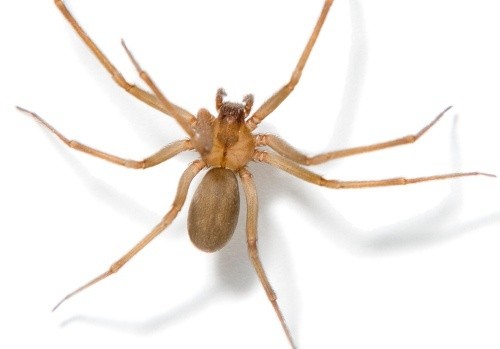 This spider did not develop its dark "fiddle" markings until adulthood. It becomes more prominent as time goes on. Previously, it was a much lighter brown color but has darkened since then. It takes one year for a spider to go from an egg to a fully developed adult. A female spider will also produce up to 300 offspring in a year's time. At the time they come into the world, they are about the size of a pin. If a spider develops in a poor area in terms of the food it is getting and the weather it is exposed to, development may be altered. Brown recluses are highly resilient, as they can go without feeding from long periods of time and still be alright. They typically live between two and four years.

The Brown Recluse is most likely to be out and about at night, and cleverly hiding during the day in small spaces. They are known to hitchhike their way into homes by the means of moving furniture, so inspect everything before moving it into your home. Recluses move quickly, so they could be anywhere from Texas to Illinois to Georgia by now. If a spider were to be outside, it likely would be under rocks and in wood piles but this is not its first choice of shelter. Like their name suggests, they are very reclusive so the suspect is most likely to be found in the home. Be sure to inspect every part of your home to avoid accidentally housing the fugitive. The suspect is likely to be found in large groups of other Brown Recluses away from all other organisms.

The suspect has committed a number of crimes in its time, but is primarily wanted numerous accounts of breaking and entering as well as speeding. 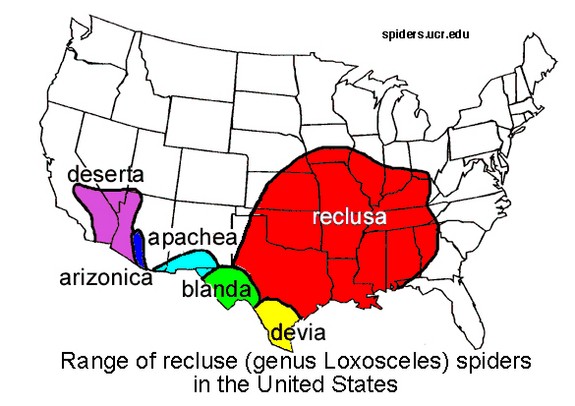 Map of possible hideouts of the Brown Recluse

Their ideal home is somewhere warm and being ectothermic (the internal temperature is depend on the temperature of its environment), it is most likely the suspect is hiding out in the home of an unknowing host. Using its long, slanted legs, the Brown Recluse is able to outrun most predators, like the Cellar Spider. If running fails, the spider has other defense mechanisms.

If you try to approach the spider, proceed with caution. Though they are not aggressive and prefer to be secluded, they can and will bite if they feel threatened. They posses a hemolytic venom that has lead to at least 5 deaths in the US in the last 30 years. While a single bite from a brown recluse can prove to be fatal, most usually develop redness and a bump at the bite sight. If enough venom is injected it can be very harmful, as it kills the cells around the bite area. 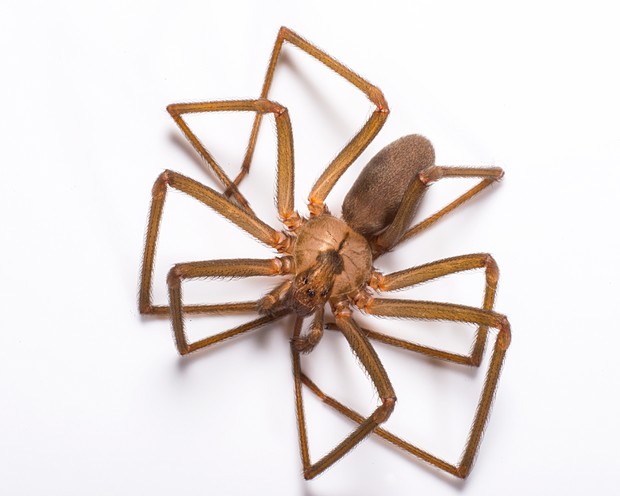