Mesfin is using Smore newsletters to spread the word online.

Get email updates from Mesfin:

The Tuskeegee Airmen were a group of all black fighter jet flyers who helped america critically during the battles in the Medditeranean and Europe. These men were allotted many Purple Hearts which were awarded to those who are wounded or killed in battle.

The logo of the WWII group the Tuskeegee Airmen 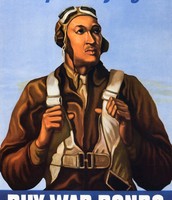 A regal looking image of an airmen

These men provided a basis for black soldiers in America to gain rights and segregation as they proved that blacks were well suited for war situations, and moved all of America to make a large step towards integration.

Mesfin is using Smore newsletters to spread the word online.