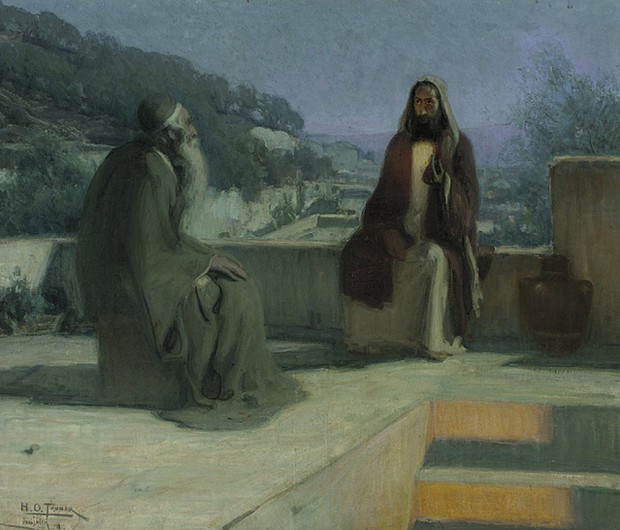 The Story of Nicodemus

Nicodemus.*1a Now there was a Pharisee named Nicodemus, a ruler of the Jews.*2He came to Jesus at night and said to him, “Rabbi, we know that you are a teacher who has come from God, for no one can do these signs that you are doing unless God is with him.”b3Jesus answered and said to him, “Amen, amen, I say to you, no one can see the kingdom of God without being born* from above.”4Nicodemus said to him, “How can a person once grown old be born again? Surely he cannot reenter his mother’s womb and be born again, can he?”c5Jesus answered, “Amen, amen, I say to you, no one can enter the kingdom of God without being born of water and Spirit.d6What is born of flesh is flesh and what is born of spirit is spirit.e7Do not be amazed that I told you, ‘You must be born from above.’8The wind* blows where it wills, and you can hear the sound it makes, but you do not know where it comes from or where it goes; so it is with everyone who is born of the Spirit.”f9Nicodemus answered and said to him, “How can this happen?”10Jesus answered and said to him, “You are the teacher of Israel and you do not understand this?11Amen, amen, I say to you, we speak of what we know and we testify to what we have seen, but you people do not accept our testimony.g12If I tell you about earthly things and you do not believe, how will you believe if I tell you about heavenly things?h13No one has gone up to heaven except the one who has come down from heaven, the Son of Man.i14And just as Moses lifted up* the serpent in the desert, so must the Son of Man be lifted up,j15* so that everyone who believes in him may have eternal life.”

16For God so loved the world that he gave* his only Son, so that everyone who believes in him might not perish but might have eternal life.k17For God did not send his Son into the world to condemn* the world, but that the world might be saved through him.l18Whoever believes in him will not be condemned, but whoever does not believe has already been condemned, because he has not believed in the name of the only Son of God.m19* And this is the verdict,n that the light came into the world, but people preferred darkness to light, because their works were evil.20For everyone who does wicked things hates the light and does not come toward the light, so that his works might not be exposed.o21But whoever lives the truth comes to the light, so that his works may be clearly seen as done in God.p