"the adventure of a life time"

"the adventure of a life time"

The Nanga Parbat stands at 8,125 meters tall; which is around 26,600 feet. No one is sure of its true height due to the fact the mountain rises a couple of inches each year

Get your gear here 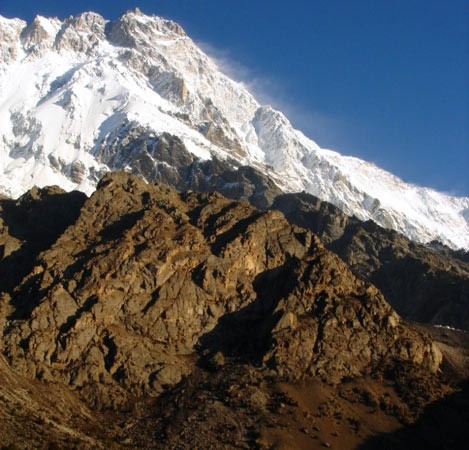 Nanga Parbat forms the western anchor of the Himalayan Range and is the westernmost "eight- thousander". It lies just south of the Indus River in Pakistan, Asia

Nanga Parbat was first climbed, via the Rakhiot Flank (East Ridge), on July 3, 1953 by Austrian climber Hermann Buhl.The final push for the summit was dramatic: Buhl last 1300 meters continued alone, after his companions had turned back. Being under the influence of drugs: pervitin, padutin and tea from Coco leaves, stood at the summit at 7 p.m.; the climbing being harder and more time consuming than he had anticipated. His descent was slow since he lost a crampon and was standing upright on a narrow ledge, holding a small handhold with one hand. Exhausted, he dozed occasionally, but managed to maintain his balance. He reached high camp at 7 p.m. the next day after a 40 hour climb.

Nanga Parbat-The Kashmiri name Nanga Parbat is derived from the Sanskrit words nagna parvata, meaning “naked mountain.”
Diamir- Diamir is a local name for the peak and means “king of the mountains.”