Get email updates from Fort Worth: 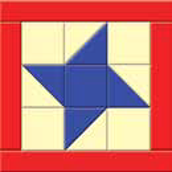 Notes from the President


March is one of my favorite months of the year. I always think of the saying, “Hope springs eternal” when I think of the month of March. The days have been getting longer since the end of December, but in March you actually start to come out of buildings after 6 and you still see sunlight. The temperatures start to fluctuate and how I love those days we enjoy in the high 70’s, low 80’s. Any worries or frustrations I felt during the winter seem to start to melt away. I hope you are finding March a month in which you feel more hope and joy.

I hope those of you who attended Terry Mosher’s workshop enjoyed it as much as I did.

At last month’s meeting I had a bit of a brain freeze… so, the four people I spoke to about a little door prize (and then I forgot all about it!!) please come find me and grab a bag from me.

Finally, look for the updated programs information, as we have had a switch to our program for this month. You won’t want to miss it.

Happy sewing and see you soon!

The board meetings are on the 1st Monday of the month via Zoom link starting at 6:30 pm. If you have something that needs to be brought to the board’s attention or would like a link to the meeting, please contact a board member. Board meetings are open to all, but only board members may vote.

This month's program has changed!! Rather than a Zoom presentational on batting, we have a live and in person program by the world renowned Texas quilter Barbara McCraw!!!

I first met Barbara at the Houston Quilt Show where she had her own display. I was totally captivated by her work, which has such a personal quality. Some of you may have taken her Baltimore Album classes some years ago; the classes were based on her own very personal Baltimore Album Quilt that depicts events and places in her grandparents lives.

She is a marvelous presenter and now her husband participates since he has taken up quilting himself. This is a Do Not Miss presentation! It's also one that we would love to have you bring your friends! Because she is a nationally known quilter there will be a $5 fee for guests and I feel quite certain that they will say it was worth it!!

AND then in April we have our own Dorene Augustyn! You will love to hear about the Joy in the Journey of her quilting life. She will also give a workshop, date to be determined, where she will guide us in making a sea creatures art Quilt!

There's always exciting things happening at the Fort Worth Quilt Guild!! Hope to see you there!!


The membership committee is happy to report that our membership is up to 83. We have almost reached pre-pandemic numbers. We have had guests at most of our meetings and some have joined us as members. Keep spreading the word about the guild and inviting your friends to be our guests at a meeting.

Here we are into the third month of the year. March we have St Patrick’s Day and according to the calendar, Spring Begins. We have had Spring like days with a little winter mix thrown in by Mother Nature and we get to Spring forward this month also.
To those that were not able to attend the February guild meeting know you were missed. Hope you will be able to attend the March meeting.
March Birthdays
3-01 Jenny Hubler
3-03. Mary Lou Nelson
3-15. Cheri Bigham
3-16. Linda B Krucky
3-16. Connie Levson
3-21. Jean Moulder
3-25. Roxanne Pillar
3-29. Beverly Peterson
Karen Holder, Marilyn Smith
Hospitality Committee

Secret Quilt Buddies has been put on Hold for now

If you are interested in contributing to HUGS quilts, please see Mary Lou at 6:15 before the general meeting on the 15th

One of the most fun parts of belonging to a Guild is getting to know other quilters. But, there aren’t many opportunities to actually get to SEW and learn from one another, except in a bee. Most of the guild bees have been around for many years and don’t have openings for many newcomers. If you want to get know more of your fellow members, start a new bee!

Bev Ramsey was a charter member of the guild, a past president, teacher, and friend. We lost her way too early. The fund was set up to help those in need to be able to enjoy the things she loved very much, retreats and workshops.

If you have a quilt or a top for the quilts of valor program, please contact

QOV will also have a booth at the Quilt Show.

Please consider making a couple of 36" square NICU quilts for JPS. It's a great chance to use up some stash, try a new pattern, etc. I will be collecting them at meetings. Their website, below, identifies other needs for sewn, knitted and crocheted donations.

I took a load of 17 quilts to JPS this week - the volunteer coordinators were very pleased with them and grateful for them. (Picture at the bottom of the newsletter!)

JPS has also said they have a great need for fidget blankets and adult quilts. I'm using this opportunity to thin my herd a little bit.

I plan to make a delivery shortly after the February 15th meeting.

President, Molly Risewick called the meeting to order at 6:32 pm.

Dorene Agustyn made a motion to accept the January minutes as published in the newsletter. Judy Turner seconded the motion and all were in favor.

The December and January Treasurer’s reports were sent to the membership via email and will be filed for audit.

Cecilia Buckholz still has raffle tickets to pick up.

Mary Lou Nelson was not in attendance.

Karen Rhyneer was not in attendance. Interested members should see Molly if interested in attending the Retreat in April.

Dorene Agustyn spoke about the upcoming North Texas Quilt Festival. Members are encouraged to enter quilts. Anyone from novice to Masters are needed to enter. The Festival is hoping to have over 400 quilts entered. The theme this year is “Bloom where you’re planted.” The Show is also looking for Certified Judges. They are also looking for Volunteers to work during the show. Volunteers will get in free the day they work.

The Guild is also in need of a booth Chairman. If interested, please contact any Board member. Items area needed for the booth. This is a great fundraiser for our Guild.

Thayne Rooney talked about upcoming programs and workshops. March we will have Stephanie Hackney with Hobbs batting. April will be our own Dorene Agustyn with “Joy in the Journey”. Dorene will also be teaching an applique workshop on sea creatures. The date is to be determined.

May program will be on wool applique and in June we will have the Guild garage sale. This is an opportunity to clean out your stash and make a little cash.

Jonquele Jones showed a couple of examples of folded flower minis she has made. She will have a workshop at her home on March 1st from 1-5pm. Contact Jonquele if you would like to attend. Limited space is available.

Ann Houpt will be our new Sunshine and Shadows Chairman. If you have any news to pass along, please contact Ann.

Forty one members were in attendance, including the four on Zoom.

Jonquele Jones showed her Dresden Snowflake, a wall hanging she made using Christmas fabrics. Thanks to Ann Houpt for some of the critical fabrics needed..

Jonquele also showed her quilt called Snowy Christmas. This was a UFO she finished over New Year’s. She also showed Texas Hold’em , another UFO finished! Jonquele showed a Kona Color Chart she quilted. She ordered it, thinking it was a paper chart. She now has a place for her quilt pins!


Sarah Tutt showed “Angel Food with Cherries”. It is not yet quilted. This quilt was inspired by the block of the same name in Pat Sloan’s current mystery Quilt.

Nancy Houston showed “Crocus in the Snow” a quilt she pieced and quilted. The pattern is Bali Wedding Star by Judy Niemeyer. She changed the color focus to make the melons look like the purple crocus that bloomed in the spring snows in Missouri, along her grandmother’s sidewalk.

Cecilia Buckholz showed a Valentine table topper she pieced and quilted. She also showed a Breast Cancer quilt she made for her Son-in-Law’s sister.

Julie Hedden showed two quilts she made for JPS called NICU scrappy. She’s made a lot of effort to use up her scraps. The scrap collection has only grown slightly with making the quilts. (how does this happen?)

The following page includes the Show and Tell from our January 2022 meeting.

The following are the Show and Tell items from the January meeting. Sorry they were not included in the January minutes.

Mackenzie Prince showed three quilts she pieced and quilted. The first was is called “Red Corset” which was her first all free motion and ruler work. She plans to hang it on a 30 foot wall in her house. The second called “Pink Corsets & Tea” used panels with lots of starch. The last was a “Baby Tetris (game) Quilt”. She made it to promote her pattern for the Geekybobbin.

Sue Hilgardner showed several quilts she made recently. The first was a red and orange quilt she made for her son-in-laws brother Moe. It was quilted by David Beers.
The next was a wall hanging called Falling Snowflakes which she quilted herself. The third was a mini wall hanging she made for herself. (Jonquele talked her into trying). The fourth was a Hearts wall hanging she quilted and will give to her Mother-in-Law. The last was called “Silent Night Snowmen”, quilted by Beverly Peterson.

Judy Faulkner showed a bed runner she pieced and quilted for herself. It’s called “No Matter How Far”. She started this Christmas bed runner using a pattern but quickly decided it should be customized for her family. On the “east” side she put her son’s apartment in New York. On the “west” side is a San Francisco Victorian house where her other lives.

Gillian Coleman showed a bag she made for Elaine. Elaine asked Gillian to make cushions from her husband’s overalls after he passed away a few years ago. Gillian made this bag for her from the left over pieces of his overalls and a work shirt.

If you, or anyone you know, is interested in placing an advertisement in our newsletter you can contact us by email: FortWorthQG@gmail.com. 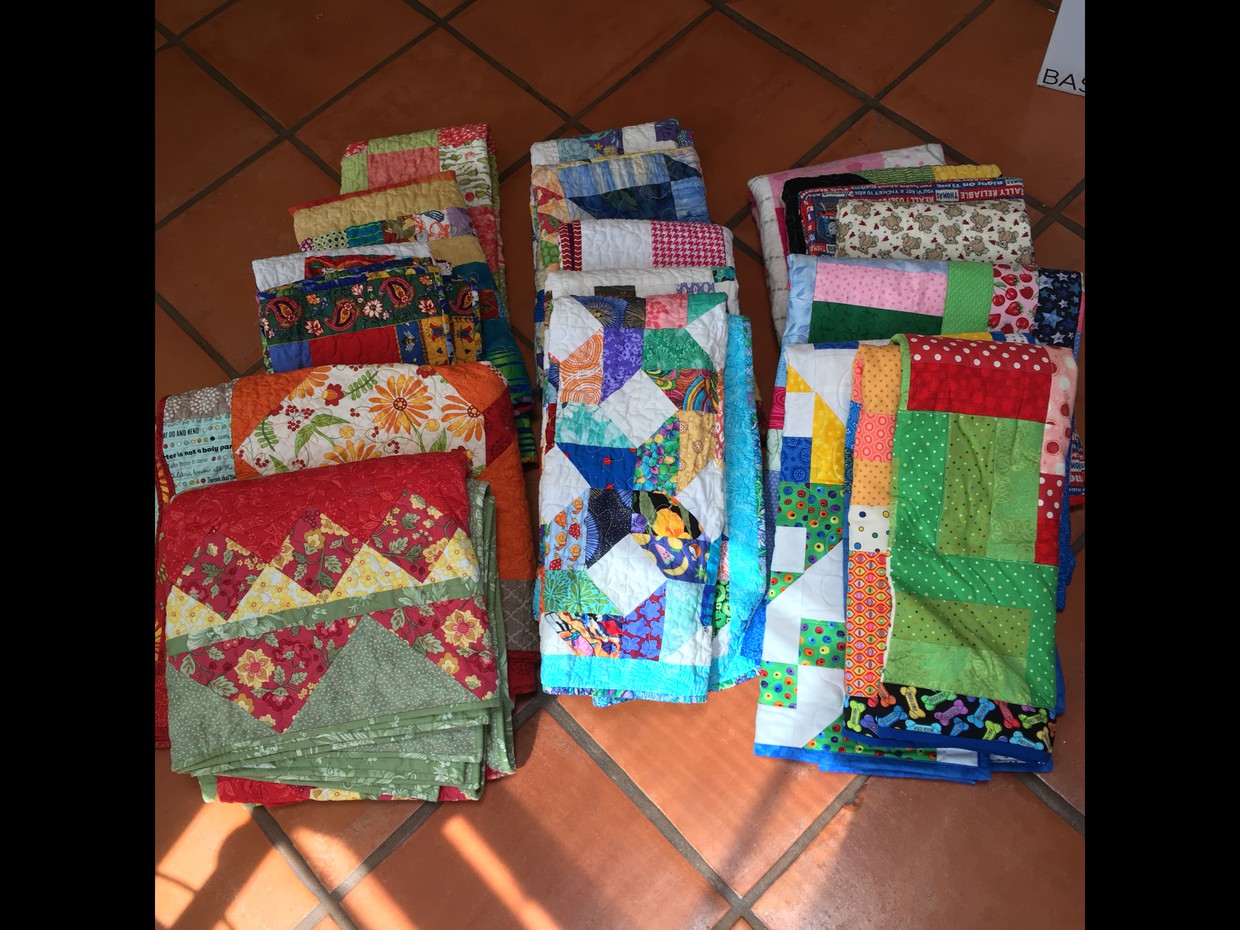 Connect with Fort Worth Quilt Guild