Micaela is using Smore newsletters to spread the word online.

Get email updates from Micaela:

Cubans had the struggle for their independence for Spain was still having slavery in place and they had voiced their desire for self-rule. Because of Spain's cruel ways, they denied their requests and continued to treat them wrongly. But the people still fought for themselves.

But because of the way the US was increasing their business they were inspired and create many things that helped to bring in millions of dollars. US was growing very worried.

The Cubans still continued to fight for their Independence. They did not give in easily. They fought many battles that ended in blood baths for both sides. They were put into re concentration camps but still had hope.

Americans say this as a cry for freedom and wanted the same. The Cubans rebellions because good read for the Americans and made the newspaper business increase greatly in the Americas.

The de Lome letter was addressed to a friend in Cuba but was somehow stolen form he mail and sent to the Journal for publication. In this letter is was directed toward the president about little food and work and treatment was horrible. The Americans took offense to this. This was encouraged to start the war.

Not long ater this the USS marine sunk in the Havana harbor. This ship had gone to Cuba because of the Spaniards out rage and the president was in fear for his Americans. An explosion is what brought down the ship after 2 weeks of sitting in the harbor.There was an invention brought up but everyone believes that it was the Spain who were responsible.

Because of this and all of the acts from the Spanish, The US had all the evidence and proof that they could declare war on Spain.

The Spanish- american war only lasted a few months, but it had dramatic results. Even though this war was caused by problems in Cuba , the first battle was taken place in Philippines.

On May 1, just days after war was declared, the Americans open fired on the Spanish. Because this was a surprise, Americans did not lose one single ship and the Spanish area was then destroyed.

After a few battles, the fighting was then moved to Cuba, The US started off with setting up blockades it defined their harbor and their area. The rough riders or the first formed US Volunteer Calvary were most of the army forces to defined the Americans from the Spanish.

On July 1, Americas launched their attack on the Spanish. Roosevelt and the rough riders charged up the Kettle hill while other forces moved to the tougher battle at San Juan Hill.

Despite the quick victory, US had lost 5.500 people and many injured for life. 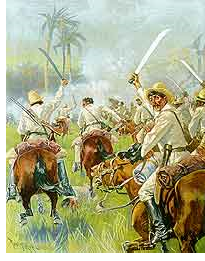 SECTION 5 A NEW POWER ON THE WORLD STAGE

Because of the Victory from the US, we moved to create a new world power.

The cartoon refers to clashing views. Leading opponents were the members of the Anti- Imperialist League, an organization formed during the war to oppose the establishment of the US colonies. This was mainly a debate over the treaty that would bring peace between the two fighting countries. This league had many of the main leaders on its side such as the President. This debate ranged for about a month.

Cuba however still remained an issue to the Americans. Although the treaty gave Cuba Independence , the islands was in ruins because of the war. For four ears Cuba was in control of the US. But in 1902 the president decided to withdraw. These provisions called the Platte Amendment, allowed the US to intervene in Cuban affairs and to buy or lease land for naval bases.

By 1913, American investment on the island had quadrupled from the prewar levels to 220$ million. 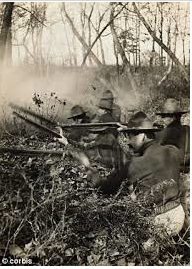 Micaela is using Smore newsletters to spread the word online.