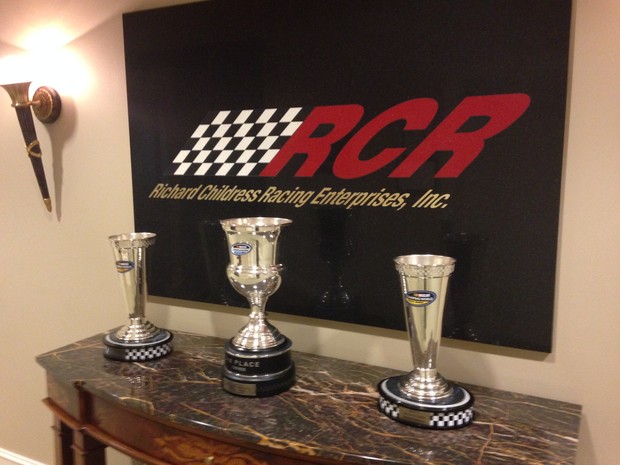 A Partnership is Born

Dr. Eric Warren is a Mount Airy native and has been involved in the motorsports industry since 1997. He has a PhD in Aerospace Engineering from NC State University and began his career as the chief aerodynamicist at Penske-Kranefuss Racing. In 2002, he became the technical director at Evernham Motorsports and advanced to vice president of the organization, then accepted a similar role at MWR. After a short-lived attempt with the U.S. Formula 1 effort, Warren joined Richard Petty Motorsports in 2010 as technical director, overseeing all engineering. He was hired as the Director of Competition at Richard Childress Racing in 2012.

Dr. Warren is passionate about getting students interested in engineering and generating that spark that sends them on a path to higher education. His passion and the STEAM initiative at Mount Airy City Schools created the perfect match for collaboration. 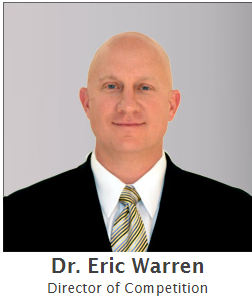 RCR’s Competition Director Dr. Eric Warren wasn’t kidding when he referred to RCR’s engineering department as the United Nations. In 2015, RCR has bolstered its resources with talent from all over the globe, but primarily Formula One.

“As these cars have become more technical, there just aren't enough engineers to go around any more,” Warren told motorsport.com. “So there’s been a lot more crossover from F1 with guys that have a lot more high level experience. They see NASCAR, ever-increasingly, as a viable career technically.” 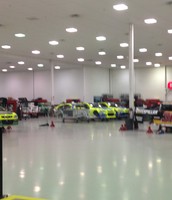 Cars on the Floor at RCR 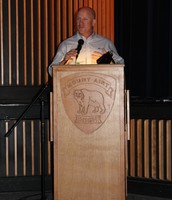 In the spring of 2015, Dr. Warren hosted a group of teachers and administrators from Mount Airy City Schools at the Richard Childress Racing facility in Welcome, NC. The group spent the day touring the facility and brainstorming ideas for ways the two organizations could work together. 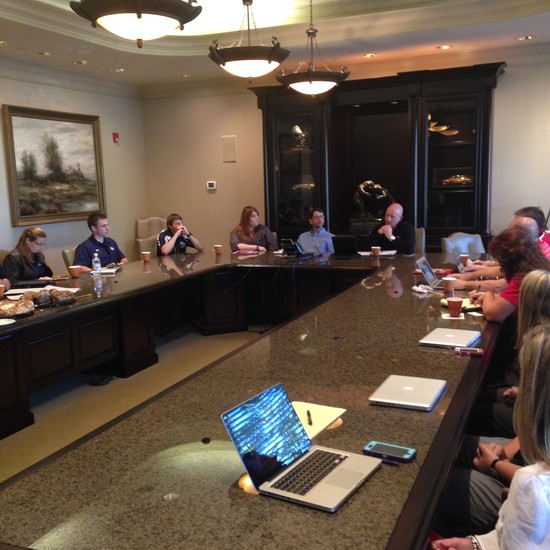 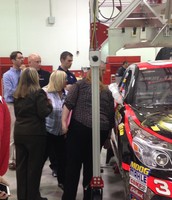 Faculty and Administration from Mount Airy High School spent the day at RCR touring the facility and getting to talk one-on-one with Dr. Eric Warren about his vision for the partnership. 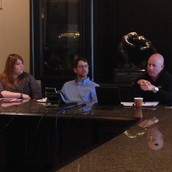 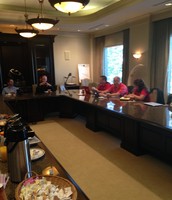 The Science House at NC State plays a key role in taking the real-world problem outlined by RCR and assisting MACS in creating grade-level appropriate curriculum for the classroom.

"Childress Gearing Company Towards the Future"

Childress continues to aim the company toward a technological future with innovations to keep them from standing still. “With a lot of changes in the cars and the rules, you got to have more technical people, more people with technical backgrounds,” Childress of his personnel. “We got some more people coming in that are from Formula 1, which is the most technical motorsport I think.”

Dr. Eric Warren, who has served as the competition director since 2012, has just as much influence. “Eric Warren has been able to put together a great group of guys and engineers,” Childress said. “We’ve added more engineers than ever.”

Childress Gearing Company Towards the Future 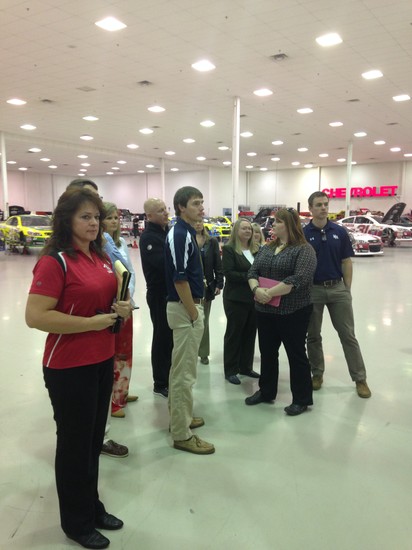 "Computers, not Wrenches, the Key to Making a Fast Car"

Long before cars for Newman, Austin Dillon and Paul Menard were loaded for the trip to Daytona International Speedway, team engineers created a setup based on thousands of combinations involving shocks, springs, roll bars, track bars, general construction and each driver.

Computers worked through most possibilities to find a scientific combination that hopefully leads to a victory. “Sometimes at these tests, we have $1 million of instruments on the car so we can be able to back out what the reference of what the track is,” Warren said. “A lot of the tracks, we have full scans of the track down to centimeters and millimeters of the track — even down to the trash cans in the garage area.”

Success is measured in tenths, sometimes hundredths, of seconds. But to a race team that’s already limited by NASCAR ever-growing eye for detail, small gains — usually smaller than the time it takes a light to turn on — often lead to big results.

Computers, not Wrenches, the Key to Making a Fast Car

Mount Airy High School and Middle School teachers spent three days this summer working with The Science House and Richard Childress Racing to begin to outline a real-world problem that students could tackle during the 2015-16 school year. 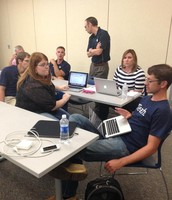 Teachers discuss ways to work across the curriculum

Teachers and administrators work to design an interdisciplinary unit 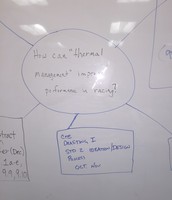 How can "thermal management" improve performance in racing? 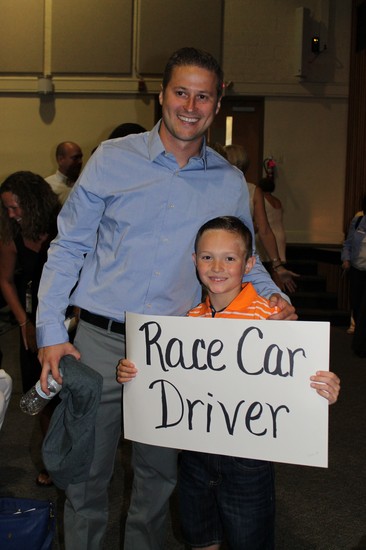 Lambert, who is the youngest crew chief in NASCAR’s top division, is coming off his most successful season on top of the pit box after guiding Newman to a career-best second-place finish in the championship point standings in 2014. Lambert’s first season with the veteran driver resulted in five top-five and 16 top-10 finishes and earned the crew chief the coveted MOOG Problem Solver of the Year Award.

As a student at North Carolina State University, Lambert was a Formula SAE Team Leader from 2004 to 2005, steering a team of students in the design and technical performance aspects of building race cars from the ground up. Shortly after college, he joined RCR as an engineer in September 2005 and spent four years as team engineer.

So many career opportunities!

Many of the students (and teachers!) did not realize that sports, in general, or NASCAR, in particular, is a business with all the opportunities that any business offers and more than most. The race team is like every other business. They have accountants, IT specialists, travel agents, marketing people, graphic artists, facilities management people (everyone from janitorial to in-house electrician), and engineers. They have their own pilots and flight attendants on the team, truck drivers, cooks at the track, and on and on. 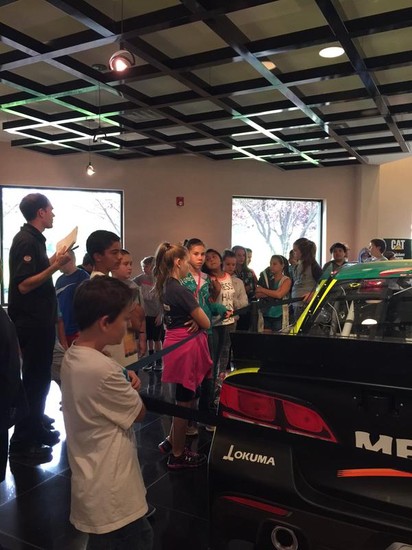 Students were able to see each stage of the production from:

Teachers have developed a driving question related to how thermal management affects race car performance. They traveled to RCR in October to do hands-on work related to that problem. This work allowed them to return to the classroom ready to present and engage the students in finding solutions. 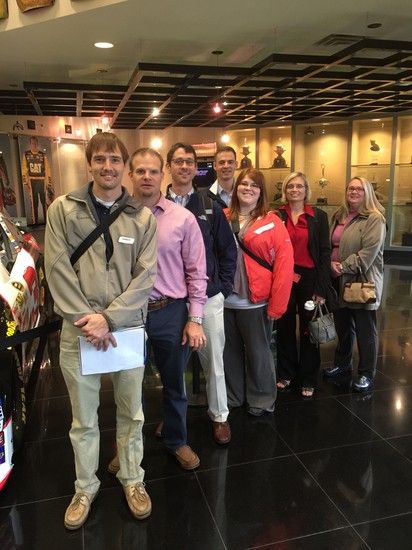 In October, three Mount Airy High School students began semester-long internships with Richard Childress Racing. These students will travel to RCR on Thursdays to work alongside some of the best and brightest engineers in the world. These students will grapple with real-world problems and assist in coming up with solutions both in their classrooms and in the RCR labs. These students will use their internship experiences as the basis for their MAHS Graduation Project. 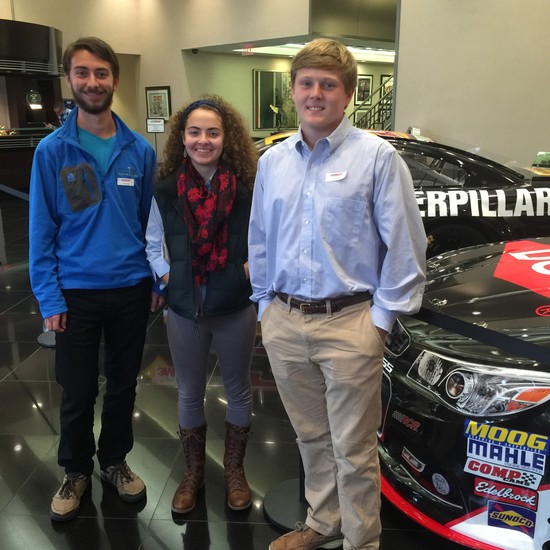 After every circuit the RCR strategy engineers look at the gap between each car. Malcolm will work with the team to create graphs of this data and interpret them. They, along with the NCSU team already in place, will look at variables in car performance vs. restart

performance and the natural effects of circuit. The driving question is: How do you model and quantify this? If both cars have equal performance, how do you out start them?

This project gets to the heart of fluid dynamics, heat, and system design. The driving questions include: What is the best design of the fuel rail in terms of volume? If we reduce the volume, does heat into the injectors decrease? The data collected could lead to testing different insulation materials to determine the best material to increase performance? Finally, output data should be evaluated and improvements proposed. Once a cost analysis is developed, the team will decide whether the improvement is worth the expense?

The first step in the Honors Anatomy & Physiology class PBL was to research the physiological effects of NASCAR racing on the human body. To do this, the class used Chromebooks to visit websites containing information on racing and its effects on the human body. After researching within their groups, they quickly realized that more research was needed. To accomplish this, the class decided to designate one person from each group to rotate from group to group informing them on the already researched material. After all the information was shared with the entire class, they used it to make decisions and prioritize the problem areas. To begin, the group chose three issues that seemed to pose the greatest health risks to the driver: g-force exposure, dehydration, and temperature.

Each group chose one issue to research more fully and then began making plans to build a model of their solution. Several groups chose to build a cooling vest, but others built models of solar-powered air conditioning. Finally, each group presented their model to the class and discussed the engineering behind the operational aspects of each model. The class analyzed the positives and negatives of each solution presented.
Embed code is for website/blog and not email. To embed your newsletter in a Mass Notification System, click HERE to see how or reach out to support@smore.com
close