Brendon is using Smore newsletters to spread the word online.

Get email updates from Brendon:

Al Capon wasn't like most gangsters he was raised in a rich family.He started he crime spree just revolt aginst his parents. his true crime didn't start till he met his future gang boss Johny Torrio. 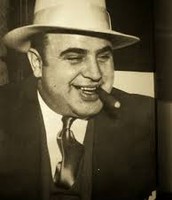 Moon shine how he made hos money

Al Capone moved his family to Miami after his old boss called apon him t come work for him once again.Once he started moon shine he was making over 100 million a year no one rrally had a problem with him till there was a gang fight that ended in mass killing but that was not his down fall they ended up getting him for not pAYING TAXES

Brendon is using Smore newsletters to spread the word online.