Thao is using Smore newsletters to spread the word online.

Get email updates from Thao:

Teens rely on technology for everything, but technology can also be a distraction. 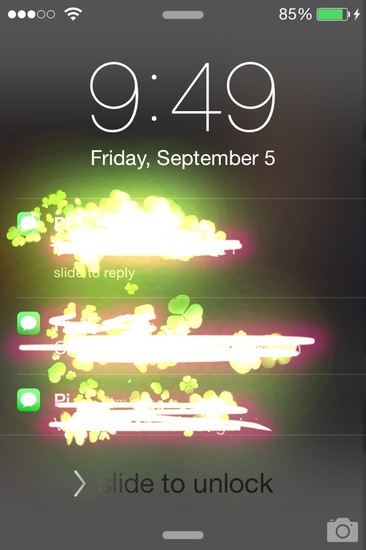 Every morning I wake up, the first thing I always check is my phone. I had a good feeling when I saw a message from someone or a missed call. I feel like I am not alone in this world, I bet that almost every teen wants that to happen to them every morning and have the same feeling. Facebook, Instagram, Messenger, etc. How can I live without those things in one day? Teens spend their time on the phone more than anything. If they forgot their phone at home, they think it would be a bad day. 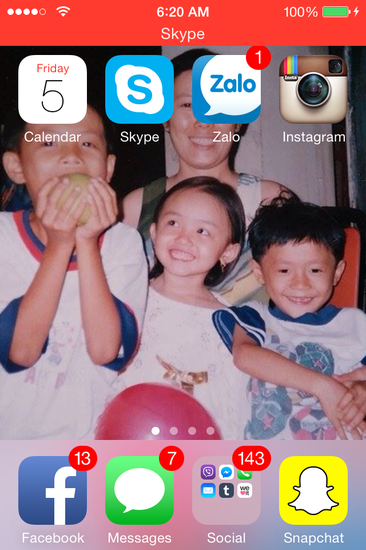 I would love to open my phone, on my very first page. Because I am happy to see my wallpaper. You can see from here that every morning my phone is too busy with those messages. If you look at my phone, you will think that I am famous or I have a busy business with my phone. It is not how my life looks like outside, I am a quiet person in real life, but I am busy with this stuff in my phone. I just look like any teenagers out there, they have their private life on their phone that no one can understand what they are really doing on their phone per minutes. 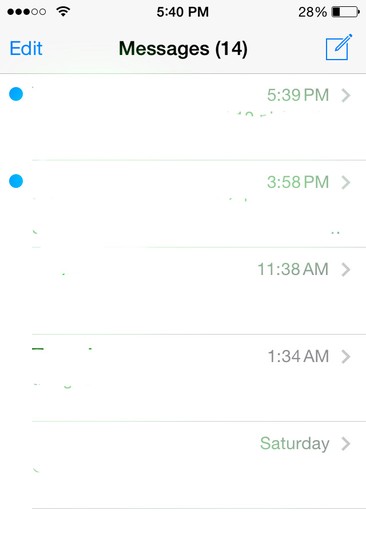 Wake up in the morning and you see the messages from someone, it can make you feel better than no one is message you. In daily life, most people use text message more than write a letter or we have to drive like a mile to come to see the person you want to talk to. But now, you just use your phone and type, then send to that person. It helps people a lot, you can also contract with the people that live far away from you. Messaging and Calling is the best way for people to connect with people. Example, when you are a college student, you wouldn't live at home anymore. You have to move because of your school or for some problems in your life. You know that a teenager wants to have their own life more than the life that their parents control them. When they are not home, and they need help from parents or their friend even those people are far away from you, you can also text or call them. 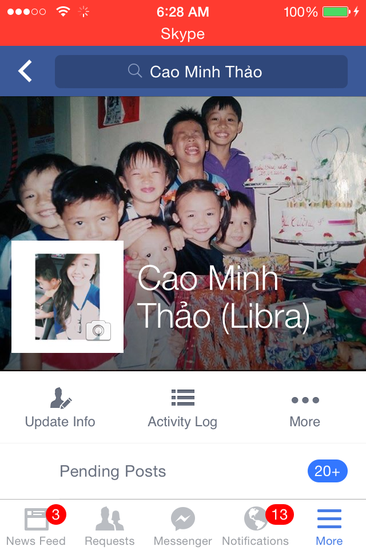 Facebook is also where people can see the gossip among their friends, virtual arguments, relationship status and updates, who is in whose ‘top friends’, you can become a fan of anything, join groups, post pictures and videos, play juvenile games, invite friends to parties or events and a heap more. Mainly, all this would just disturb people into living life to their fullest.
It’s not just teens who become addicted even grownups do. An average person spends about 55 minutes on Facebook. This statistic isn’t that bad, but some people spend about 3-5 hours. Technology might be taking over people’s lives. The internet is what the youth does almost all the time and other growing social networking sites such as Twitter might become the next Facebook. 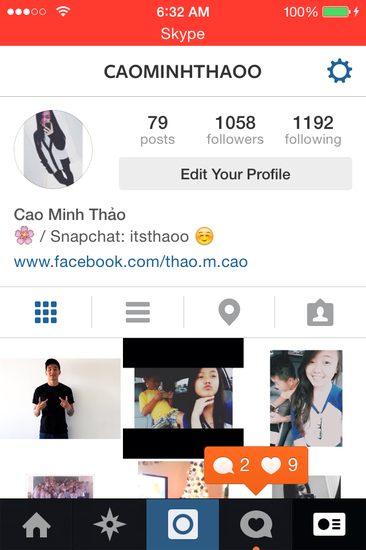 Another form of social media that I find myself using throughout the day is Instagram.

The pleasure of using instagram is it makes the users themselves feel like artists, and the fascination of instagram for those marketers is gaining attention and interests from general customers. Instagram unquestionably revolutionized the mobile photo editing, and undoubtedly has huge potential for branding and outreaching.For those marketers who want to promote their new products, take a nice snapshot, apply the professional filter to the picture and add a captivating caption, will surely tap into the audience. The use of instagram is really simple that all the procedures can be done on their smart phone or on webinstagram, no complicated procedures are required from the users, basically just includes taking photos, editing photos, sharing photos and following other users’ photo streams. There is an age restriction, however where the terms of agreements... 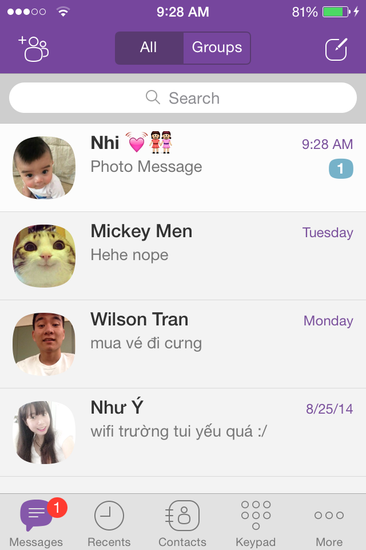 Viber is an app that you can text and call for free. I really enjoy this app because I can call and text to my friend, family in Vietnam. And this app is awesome. A selection of images that can be texted as an alternative to written messages, the stickers available include love hearts, a red rose, the obligatory LOL, and the controversial middle finger hand gesture. There have been outraged calls for its removal. 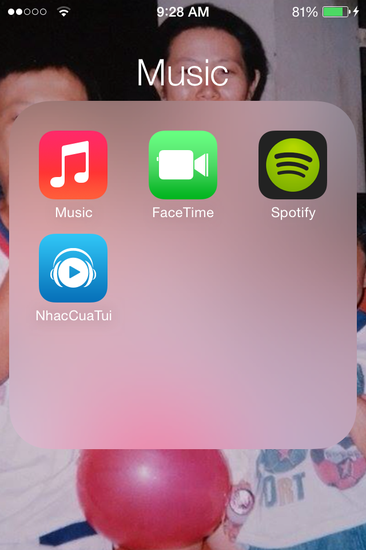 Music for everyone - Spotify

www.spotify.com
Spotify is a digital music service that gives you access to millions of songs.

Music is the thing that any teen as I am can not live without it. I really enjoy these two apps. I can listen and download music for free. I can also listen to my Vietnamese music. Spotify is the app I use to search and listen to American music. Nhaccuatui is a Vietnamese app, those apps are really useful. And I know for sure that we can use those apps all day to listen to any music you like to. 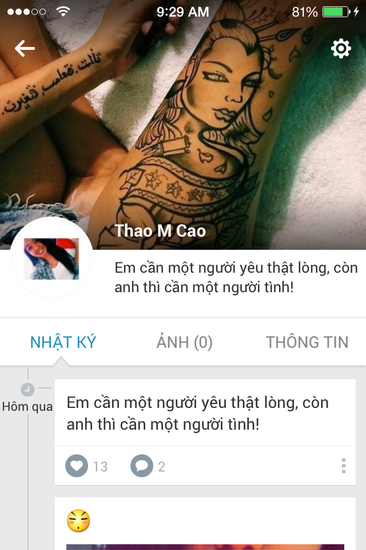 This app seems like similar to Viber and Facebook. It's hard for me to contract with my friend in Vietnam, and I do not have to worry anymore because I can use this app to update news in Vietnam. And sometimes, I feel like I live really close to them. It's awesome app, and I use this app every single day! Just like American teens, they have Tumblr and Tweets, Facebook,etc. 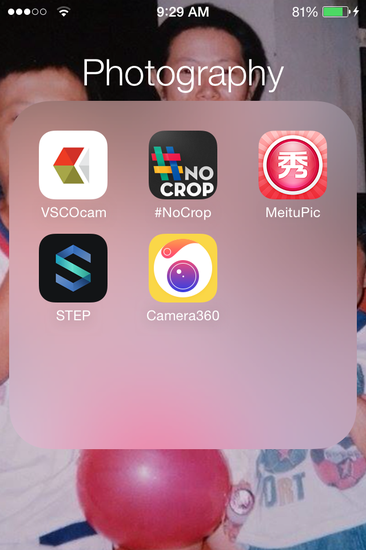 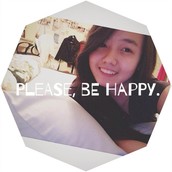 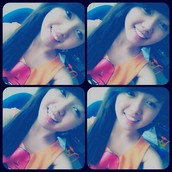 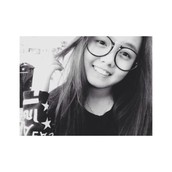 My favorite thing to do when I am bored is to edit my photo. That's why I like to find and download any app that can credit the photo. IT'S BORING TO BE NORMAL! So let to do something cool for your picture. I feel like I am professional when I editing my photo. There may be one or two photos that are technically bad, but you see some potential there for a special effect or art treatment. Digital cameras have come a long way. The pictures you take now are so much better than they were ten or even five years ago, and you may not think you need to do any post processing, or out-of-camera photo editing, before you print or share your photos. But there are just a few, simple things you can do to make those good photos so much better. 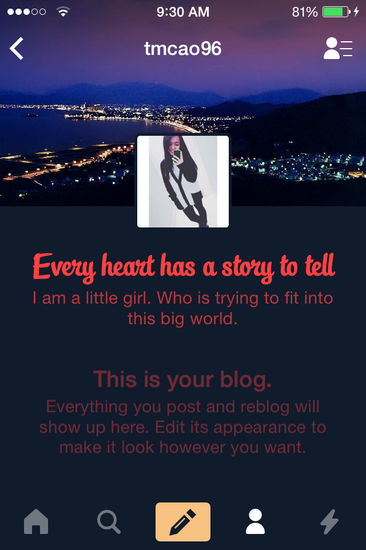 Every heart has a story to tell

tmcao96.tumblr.com
I am a little girl. Who is trying to fit into this big world.

Tumblr debuted in 2007 as part blogging tool, part microblogging tool, and part social community. Each user has his or her own Tumblelog where they can publish short posts of text, images, quotes, links, video, audio, and chats. You can even reblog a Tumblr post that was published on another user's Tumblelog with the click of the mouse, just as you might retweet content to share it on Twitter. Furthermore, you can like other people's content on Tumblr rather than publish comments as you would on a traditional blog post. Tumblr is extremely easy to use and also works on every mobile operating system.You can link your Tumblr account to other social networks you use and you can feed your traditional blog or other RSS feed to your Tumblelog. You can also create static pages such as your own Questions page that people are automatically taken to when they ask you a question. If you want to make your Tumblelog look more lie a traditional website, you can do it by adding pages. You can make your Tumblelog private or just make specific posts private as needed, and you can schedule posts to publish in the future. It's also easy to invite other people to contribute to your Tumblelog.

Thao is using Smore newsletters to spread the word online.