Family Bible time for the week of April 18-April 24

Family Bible time for the week of April 18-April 24 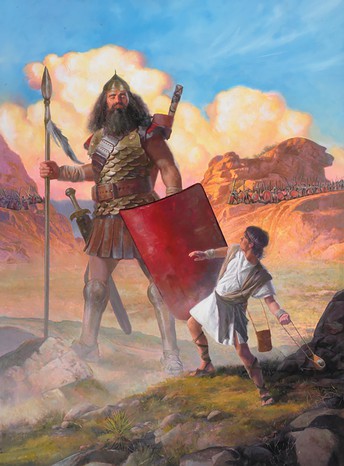 At first, Saul was a good king who looked to God for guidance and followed His Word. God gave Saul many military victories over Israel’s enemies. But then Saul turned away from God and stopped obeying Him. God rejected Saul and had Samuel anoint the shepherd boy David, though it would be years before David would become king. In this narrative, the Philistines were again waging war against the Israelites. Their champion, the giant Goliath, challenged any Israelite to a battle, but no one would fight him. Young David arrived, and hearing Goliath’s taunts defaming the true God, he marched straight to Saul, determined to fight the giant. Rejecting the offer of Saul’s armor, David arrived on the battlefield with only a sling, some stones, and the faith that God would give him victory. David slung one stone to Goliath’s forehead, and the giant fell to the ground, where David cut off his head with Goliath’s own sword.

Dear God, we could never win our battle with sin and the devil on our own. Thank You for giving us the victory in Jesus! In His name we pray. Amen.

The Philistine army was fighting against Israel, and they had a huge solider as their champion. King Saul neglected his duty as the king of Israel by refusing to fight Goliath. He let his fear overpower his trust in God. Goliath was more than just a big bully and political enemy. He was mocking God.

David put his confidence completely in God’s power. Even though he had no armor or weapons, David was not afraid. He knew that God would give him the victory over Goliath.

Thanks be to God, who gives us the victory through our Lord Jesus Christ. 1 Corinthians 15:57

Our God - Chris Tomlin (with lyrics)

Thank You, Jesus, for striking down the Goliaths of sin, death, and the devil. Like David, help us to place our trust in You, no matter what troubles we face. In Your name we pray, Jesus. Amen.