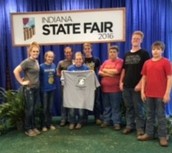 Members of the Scottsburg FFA chapter traveled to the state fairgrounds to assist in the cleaning of barns along with the sheep shearing contest. Members collaborated to run the sheep judging process and worked together to clean a total of 23 pens in the sheep barn.

Congratulations! You’re having TRIPLETS!!! Scottsburg High School Child Development classes are proud to introduce three new additions to our classroom. Earlier this week, three RealCare babies arrived in our classroom as a part of a new real life component of our curriculum. RealCare babies are the only infant simulator with wireless programming and software that allows the teacher to monitor the care of the infant. Students will take the babies home for 3-4 days, and they will have the responsibility of caring for the child all hours of the night. The baby simulator holds students accountable by tracking, measuring, and reporting on the following items:

The infant simulation experience is used to help teach our students about infant health and wellness, child abuse prevention, parenting skills, child care, early childhood and health occupations career skills, and the realities of caring for a child as a teenager. Along with caring for their RealCare baby, students will journal about their experience and what they learned throughout the simulation process. The Family Consumer Sciences department is excited about the opportunities and real life experience these RealCare babies will bring to the classroom. 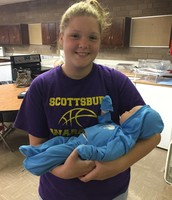 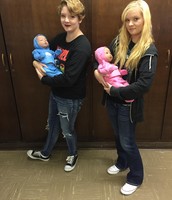 Brewed Awakening, the coffee shop at Scottsburg High School, opened for business today. This semester's crew did a lot of work getting ready for the big day. It was decided that before the first product was sold, Brewed Awakening would launch a marketing campaign in the hope of increasing interest and sales.

The crew brainstormed marketing ideas and decided to combine a commercial for Brewed Awakening with an introductory one day sale. The commercial, which was written, filmed, and edited by the students, focused on slushies (the shop's most popular item) and aired on closed circuit TV within the high school on Wednesday. It was also emailed to all teachers to be watched during advisory on Thursday.

If you thought that you had to travel to Brazil to witness astounding athletes at the Olympics, you would be wrong. Students in Mrs. Coverdale’s Spanish 2, 3 and 4 classes participated in the first inaugural Juegos Olímpicos on Friday, August 19.

The aspiring Olympians competed in events such as:

The original intent: Students use plastic bananas to bowl over empty water bottles.

The reality: Students had to improvise with a yellow tennis ball due to a lack of available plastic bananas.

The original intent: Students are blindfolded and throw a tennis ball into a small trashcan.

The reality: Success! This one worked as planned! Try that one, Kobe!

The reality: Students preferred pudding over yogurt and possessed more balance than anticipated. “I had so many kids who finished their pudding and continued to stand there on one foot with no sign of yielding. I eventually had to have them hop on one foot. That’s when they started dropping to the final three.” said Mrs. Coverdale

The original intent: Students were challenged to eat a Hershey kiss as slowly as possible.

The reality: “I severely underestimated the discipline and competitive nature of my students,” Mrs. Coverdale said. “I can gulp down a chocolate kiss in one-hundredth of a second and I thought the kids would do that too. I was wrong!” Some of the chocolate kisses lasted over four minutes and the event had to be called a tie.

Tent and Tunnel Run: (There wasn’t an alliterative Spanish title for this one.)

The original intent: Students had to jump inside a play-tent (designed for a four-year-old) scurry through the tunnel, jump a hurdle and cross the finish line.

Unfortunately, the bell rang before the other events were completed, but students received “medals” for first, second, and third places.

Mrs. Coverdale stated that the event was a good way to welcome students back into the classroom. “We actually learned some vocabulary about sports and winning; losing and cheating, but the “games” were basically to celebrate the first full of school. I had such a great time that we might even do it again next year - it might take that long for me to recover!” she said.

So, if you are missing watching Keri playing beach volleyball or Usain run like the wind, cheer up because you won’t necessarily have to wait four years for the return of the Olympics. Come to McClain Hall next August for the second annual Juegos de los Olímpicos. 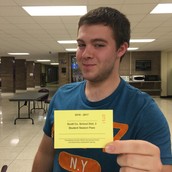 Get Your Spirit Mojo Ready

Don't be left out of the loop when they talk about the game the next day. The 2016-17 season tickets are on sale now! All currently enrolled SHS students that purchase a Student All-Sports Pass for $30.00 will receive their choice of a gnarly Scottsburg Athletics sweatshirt or t-shirt. Wander down to the Athletic Department to purchase season tickets during lunch or passing period.