In this tragic play by Sophocles, Oedipus is blinded by his hubris. Oedipus's sense of hubris has caused suffering to others and himself because he cannot except that he is the plague. He does this by denying his fate that he will marry his mother and kill his father. As the story goes on Oedipus is determined to find the person who has brought suffering to the city, he then encounters Creon. Oedipus says "You dare to show your face? You come to my house, a man who killed the king and now wants me dead...You have some nerve."(pg. 85). This is one of the points in the book where Oedipus's hubris shows and has no longer good intentions for everyone but for himself. After Oedipus's and Creon's encounter, Oedipus encounters Tiresias. Just like before Oedipus blames Theresias for the blights on the city and mocks him for his blindness, ironically showing that Oedipus cannot see reason. Later on in the story Oedipus realizes that he is the one who has brought the blights to his city and has fulfilled his fate that he will marry his mother and kill his father. His wife/mother then kills herself for she cannot bere being married to her son, as for Oedipus he stabs his eyes with his wife/mothers broches and blinds himself.

Events or People in Oedipus Tyrannos 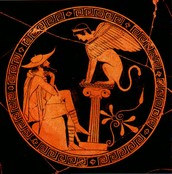 Oedipus and the Sphinx

"...for you were the one who saved us, putting an end to the cruel songs of the Sphinx and the terrible toll she exacted" (61). As a result of solving the Sphinx's riddle Oedipus was crowned as king of Thebes, which lead to Oedipus' fate. 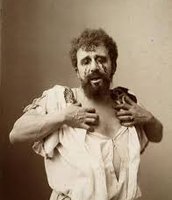 "I was that blight, that stain, and I could not gaze with steady eyes upon those images I loved that now despise me. Had I been able also to block my hearing and be deaf as well as blind, I'd have done that too to make a perfect cocoon for my wretchedness where I could hide in my thoughts in a world of sorrow." (129). 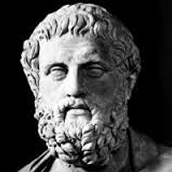 Creon attempts and offers to help Oedipus but he declines Creons help because of his hubris. "I take a solemn oath, May gods strike me dead if I have done what you say I have" (92) Creon swears he has spoken the truth but yet Oedipus does not believe him, nor, does he trust him

Sophocles',"Oedipus Tyrannos," utilizes hubris in order to argue that pride deteriorates the ability to see reason.

"I was that blight, that, stain, and I could not gaze with steady eyes upon those images I loved that now despise me" (129).

Who is the Tragic Hero

In Oedipus Tyrannos, Oedipus is the tragic hero. In order to qualify as a tragic hero the person needs to be of noble birth, and Oedipus is the son of King Laius and Queen Jocasta of Thebes, however he is also the husband of Queen Jocasta. Through a prophecy, first known by King Laius, Oedipus is fated by the Gods to live in great suffering for example blinding himself, and his wife/mother killing herself. Oedipus does contain some heroic attributes, such as, being vigorously involved as a king, for example trying to find King Laius' killer, also he tries to put the people of Thebes in peace as they try to figure why the Thebes is cursed. Even though Oedipus is fated, his choices such as disrespecting Tiresias and Creon, as well as accusing them of treachery, because both Tiresias and Creon tell Oedipus is the curse of Thebes, caused him to continue his fate; if he were to have followed what both Tiresias and Creon had said Oedipus's fate could have had a different outcome.

Requisites to be a Tragic Hero 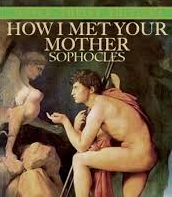 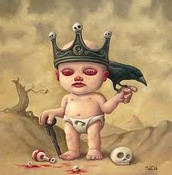 This cartoon takes a satirical view on Oedipus and how his hubris made him look like a baby and because of his hubris not allowing him to see reality and reason, he is left in a barren, isolated land, just like a blind person and in this cartoon Oedipus is blind. 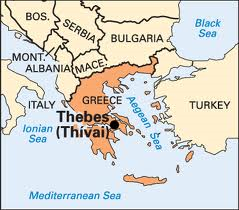 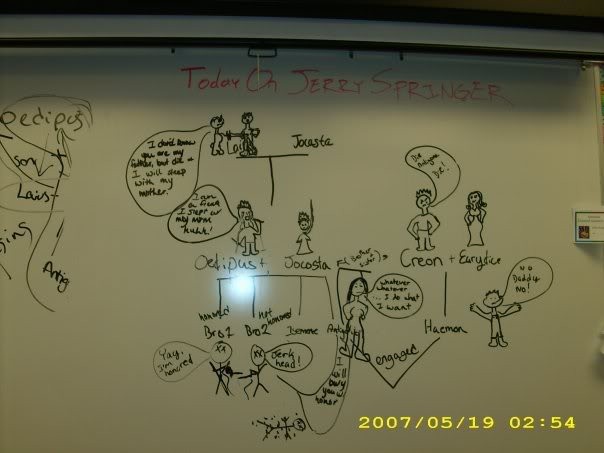