Henry grew up in Greenfield Township, Michigan. His father was a farmer and wanted Henry to take over the family farm, but Henry had no interest in farming. He was much more interested in machines and building things. He left home at the age of 16 and went to Detroit to become an apprentice machinist. Henry Ford started the company in 1902 with $28,000 in cash. He was 40 years old when he established the company's first factory on BagleyStreet, Detroit.Then, in 1908 Ford introduced the Model T, which was designed by Childe Harold Wills and two Hungarian immigrants, Joseph A. Galamb and Eugene Farkas

Ford provided a place to work for the disabled who otherwise had a hard time finding a job, reduced work shifts and doubled all employee's salaries.The Ford Model T was reliable, practical and affordable, which made it a big hit in the US, where it was advertised as the middle-class man's vehicle.

Over 15 million Model T cars were made and, by 1918, over 50% of the cars in America were Model T's. By the mid 20's, the Ford label had crossed the ocean and reached England, France, Germany, Denmark, Austria, and Australia. In 1922 Ford entered the luxury car market by buying the Lincoln Motor Company. With the arrival of WWII, Ford increased its influence on the global stage becoming an active player in the war effort,

When the US War Department handed production of B-24 Liberator airplanes to Ford, the output rose to 20 airplanes per day. In 1955 Ford introduced the famous Thunderbird model. In the 2000's the company came to the point of near bankruptcy because of their union.

The Model T Ford was the original car that Henry manufactured using the assembly line process. It was very cheap compared to competitive cars and it was easy to drive and to repair. Using an assembly line allows for the mass production of products at a cheaper price than trying to build an entire product one at a time. What Henry Ford did was apply the concept of mass production to automobiles at a much lower price than current production methods, making it affordable for lower classes. 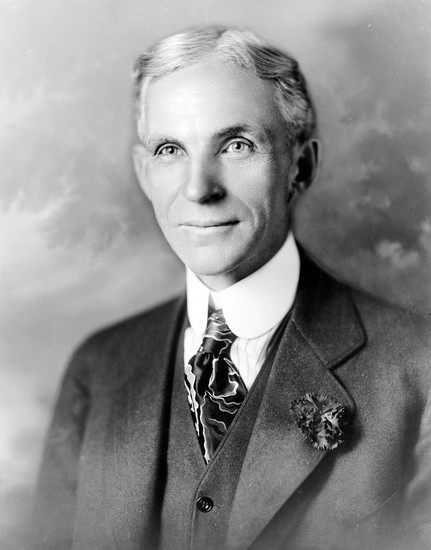