All You Can Eat Wings

Join us at the Turner Hall for an egg hunt on Saturday, April 20. The hunt starts at 9:00 AM. All are welcome!

The Turner Fundraising Campaign Committee has met and you can expect to see a letter in the mail or be contacted in person within the next few months by 1 of the committee members. Please consider giving this financial undertaking some serious thought.

Thanks to the committee – as they were gracious enough to volunteer their time and energy to take this tough task on. This is our big push to keep Turners viable for years to come. Thank you for your support and understanding and if you have any questions or concerns please contact me.

The April meeting will be on Monday, April 15th. All hands on deck are needed to get the eggs ready for the egg hunt. We'll also start to talk about Kids' Day. It will be on June 1st this year.

Please welcome Derrek Ealy as our newest member as a cook. He will be a great asset to the 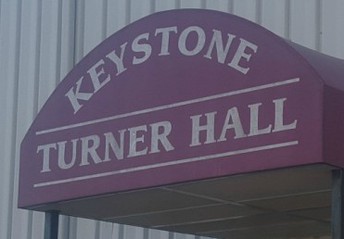 The Turner Hall offers a banquet room that can seat 450 people, great for wedding receptions, anniversaries, dances, appreciation dinners, large banquets, etc. We also offer a smaller room, (red room), that works great for meetings, luncheons, birthday parties, smaller banquets, etc. The Turner Hall boasts a six lane bowling alley with many leagues throughout the year. Finally, we have a bar and grill serving a variety of beers and cocktails and the kitchen making various sandwiches, salads, wraps, and appetizers. The kitchen is also equipped to cater the largest to the smallest events with a wide selection of cuisine to choose from.

The Keystone Turner Hall hosts numerous events throughout the year. We have our wild game feed (members only), in February, a testicle festival in March, egg hunt for Easter, Children’s Day in June, golf outing in July(members only), BBQ roundup in August, costume contest for Halloween, chili cook-off in November, Christmas drawing in December, and many Prime Rib/Shrimp/Chicken dinners throughout the year.