Welcome Back from Winter Break!

Welcome Back from Winter Break!

Bring the following to class on Tuesday, January 7

Early Christian, Byzantine, and Medieval art can be kind of confusing. The problem mostly lies in the fact that these periods overlap somewhat. One way to separate Medieval Art from the mix is to consider it outside of the Roman Empire. The art will still be Christian, but the medieval work you focus on will be located a little outside of the realm of the church…mostly because nothing could truly escape the grasp of the Church at that time. It's far away enough to accomplish this! For example, this section of the test may include northern Europe with Gothic tribes, or the British Isles. Think Medieval; think Viking.

Byzantine art stretches from about 500 CE to 1200 CE, during which Constantinople, the capital of the Byzantine Empire, was the world's flourishing center for trade. The work of this period is unique in that it straddles two distinct styles. Byzantine art often contains both Classical traits and newer Medieval characteristics, which delivered the message that the new Empire had a powerful history but planned to move forward into a new era of power and religion.

Byzantium wanted to decorate their capital with splendor. Byzantine structures are notorious for their plain exteriors and elaborate interiors, as well as two-dimensional works such as illuminated manuscripts, icons, and mosaics. The distinction between inside and outside is huge. The predominant use of gold symbolized the wealth of the empire and served as a kind of Byzantine special effect, so the glow of surfaces in a sacred space made it look supernatural.

(Case in point..the Hagia Sophia below) 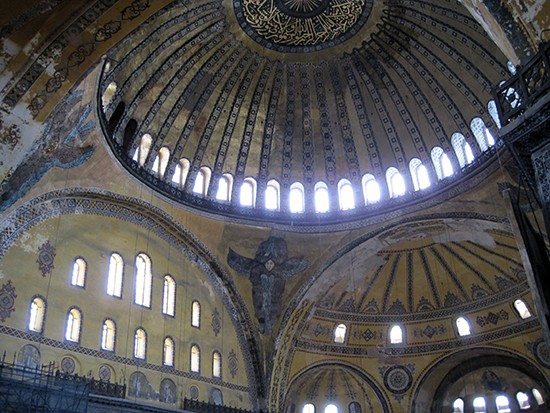 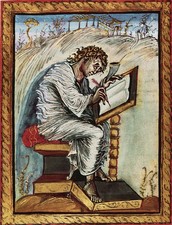 Next Up Unit 10 - Carolingian and Ottonian Art

The Medieval period moves completely outside of the Roman Empire into the Carolingian Empire and the Ottoman Empire in modern Germany and Austria. Places outside an existing empire consisted of nomadic groups that stalked the land looking for places to pillage; many of these supposedly "barbaric" groups had been displaced by invasions of imperial expansion.