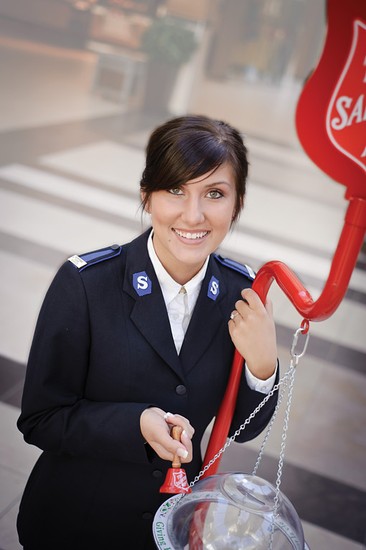 Ambassadors for the Army

In his second letter to the church at Corinth, Paul exhorted the members to think of themselves as “ambassadors for Christ” (II Corinthians 5:20). In the next few weeks, a number of us will have the opportunity to be ambassadors for The Salvation Army. For many in the community, it will be their only contact with the Army’s representatives during the year.

I am referring, of course, to those who will be attending Christmas kettles in malls and other strategic locations across the country. There is a world of difference between the individual who smiles warmly at passersby, graciously thanks all who donate and radiates pride in her assignment, and the individual who projects an image of boredom and indifference.

The kettle donations support the Army’s ministry to thousands for whom Christmas would otherwise be a bleak period. Let us take full advantage of this annual opportunity to be the Army’s enthusiastic ambassadors to our communities.

The season for the Christmas Kettle campaign is almost upon us. The following guidelines will help us to safeguard kettle donations and keep our workers safe:

In the June 4, 2014 issue of Money & Mission the Finance department announced the movement of the Canada and Bermuda Territory to the new Agresso financial system, commencing in April 2015.

The implementation process is now well underway. An implementation team with members from the Finance department’s management team and from IT is currently heavily involved in the training and building phase of the process. Testing is expected to begin in January.

Key aspects of the new system are:


We will shortly be releasing a Discussion Paper and Invitation to Comment on the proposed chart of accounts. Our goal is to ensure that the new chart of accounts will meet all legitimate reporting requirements.

We will also be developing a training program for Army personnel affected by the new system which we expect to deliver early in 2015.

We are very excited about the Agresso system. We expect it to give the territory information which will help us to make more timely and effective decisions.

Please send a note to the consolidation group at THQ_Consolidation@can.salvationarmy.org if there are any changes to your external audit or your unit requires a new external audit. Internal audits need to be requested through your DSBA, who will work with internal audit to determine the feasibility of your request. Remember that vacations must not be taken during the audit season, usually between late April and early June. This is to ensure that staff is available to answer audit questions. Ministry units will be notified of the exact audit dates when they become available.

Receipting and Safekeeping of Gift Cards

These days, it is quite common for ministry units to receive donations in the form of gift cards or certificates, particularly around Christmas. However, when it comes to issuing a charitable receipt, donations of gift cards are not as straight-forward as cash donations.

According to Canada Revenue Agency, a charity may issue an official donation receipt for a gift card only in the following situations:

a) When the holder of a gift card that has been issued for consideration donates the gift card to a registered charity. For example, an individual purchases a $50 gift card from Wal-Mart and donates the card to a corps. In this situation, the corps may issue a $50 donation receipt right away, even if it does not redeem the card until later;

b) When the issuer of a gift card donates it to a charity for no consideration, the registered charity can only issue an official receipt at the time the charity redeems the gift card and receives property. For example, on April 1, 2014, Wal-Mart donates five $100 gift cards to a corps. On December 20, 2014, the corps purchases $390 worth of supplies from Wal-Mart by redeeming four of the gift cards, leaving an unredeemed balance of $110; which is later redeemed in full for more supplies on January 8, 2015. In this scenario, the corps may issue a donation receipt dated December 20, 2014 for $390, and another receipt dated January 8, 2015 for $110.