Read to discover Magellan's journey across the world.

Read to discover Magellan's journey across the world. 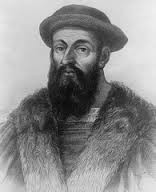 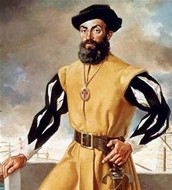 Ferdinand Magellan(Is the explorer that i am tipping about) wanted to sale all the way around the world but unfortunately he died before he got to. He died in a fight with some people from a island and they killed him so that was why he did not make it all the way around the world on his voyage it was also a big disappointment(not very good) for the people that were on the ship with him.

Ferdinand Magellan had a wife and a kid. The reason why he wanted to be a explore(to travel) was because he felt like he wanted to do more with his life however is wife did not want him to be a explore because she was worried that he would die and she was exactly right and his daughter missed him very much.

When the Victoria(Magellan's ship) had left Seville over three years earlier it had been in fine shape. Now one of her three masts was gone. The other masts(a long pole on a ship that supports the sails) creaked painfully as the wind filled the patched and worn sails. The ships timbers were worn, eaten, and heavy with barnacles. The Victoria was leaking so badly that her crew had to constantly pump out seawater.

Only 18 members of the Victoria's 50-man crew survived the long journey(to travel). Some people think that it is easy being a explore but it is not easy at all some times explores die at a young age or they can die and leave behind there family so it is not easy being an explore.

Portugal's King Ma-noel had tried to stop Magellan's expedition when it was in port. Now Magellan was afraid the king would send Portuguese warships to harass him at sea. He believed the Portuguese would expect him to sail west to the Atlantic to South America where he would look for el paso. Magellan decided to sail south to the coast of Africa ,then cut across the ocean to South America. He hoped that this would throw off any Portuguese sailors. However, this route lead to voyage of the new world. It also brought very bad weather. After November when all the ships crossed the equator , all of the captains met on the Trinidad. One of the captains demanded that the fleet's be changed. The captain said that he would no longer follow Magellan South. When Magellan heard about what he said he put him in jail for saying that he would not follow him south. This quick action stopped talk of mutiny among the Spanish captains at least for a while. On December 13, the five caravels went to Rio de Janeiro Bay, on the coast of South America. Magellan's men spent two weeks there. The local Indians called this region Verzin.

While the ships were docked Rio de Janeiro the new captain of the San Antonio, Antonio de Coca released Cartagena. Then the two Spaniards(a person that lives in Spain) tried to stir up trouble with Magellan. Once again the Portuguese captain was the one that had stride up the trouble and the trouble was that the Portuguese captain let out his soldiers again. This time he put both of the trouble makers in jail. Magellan's cousin was put in jail in the San Antonio. 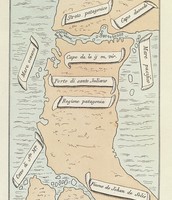