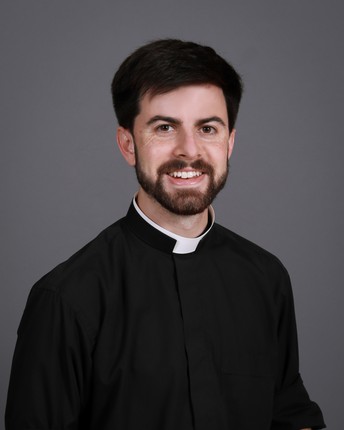 Do I want Marian Central to be a boring place? Yes.

What we want for our Marian students is happiness. Happiness is quite often far more “boring” than what it’s made out to be in books, music, and tv. It’s in the everyday, common stuff that real happiness is found. Students laughing in the hallways is a regular occurrence, but a necessary and needed part of our school. The married couple sitting on a porch not saying a word, there’s a happiness there far deeper than what we might see on the surface.

Like the sounds of the widely successful opening of the ping pong club, I’ve had reflections on holiness bouncing around my head. At the Vatican, there’s a group in charge of looking at the lives of possible saints and they use this criteria for holiness: fidelity to the mundane tasks of ordinary living for an extended period of time. What a boring definition, but also wildly helpful for living peaceful lives.

To get the most out of Marian is to be open to what formation can take place here. To attend

class will get you a grade. To ponder/question/absorb the material is to become a student. That requires time for contemplation. Holiness for our students will be to make the desk an altar on which they offer their sacrifices of school work daily. Not every day will the sacrifice be a home run, but if they offer it anyways, even when it’s boring, there will be holiness.

A coach isn’t interested in a player that can make a big play once in a while, but never shows up to practice. A coach wants a team of individuals bought into the mission, bought into the goal.

That creates a culture where excellence is found. A coach knows that a team can be formed

into a better one through practice, but the whole team must show up over and over again. Even when practice is boring, there will be holiness. In a world wildly wound up by societal whims, pandemic problems, and dissent, do we really need to add extra stress to our children? A little “boring” would actually calm things down. A “boring” where we all show up, work hard together, and then go home and rest.

Will a student have better opportunities in the future if they participate in many things? Probably. Is it good to fill every hour with clubs, sports, homework, study, social obligations? Probably Not. With mental health issues being on the rise, time off for rest and contemplation has become a therapeutic reality that gets left as a second thought. When was the last time the whole family got to stay at home for a weekend and just be?

Fidelity to the mundane tasks of ordinary living for an extended period of time.

Marian must be a place where curiosity thrives, where students hope, and where growth

happens. However, Marian is a place that will thrive best when our relationships are in good

order. Like an old married couple sitting on the porch, perhaps that will look boring to some…but the depths of experience, growth, peace, and mutual support are well worth it.

To the Heights, Together! 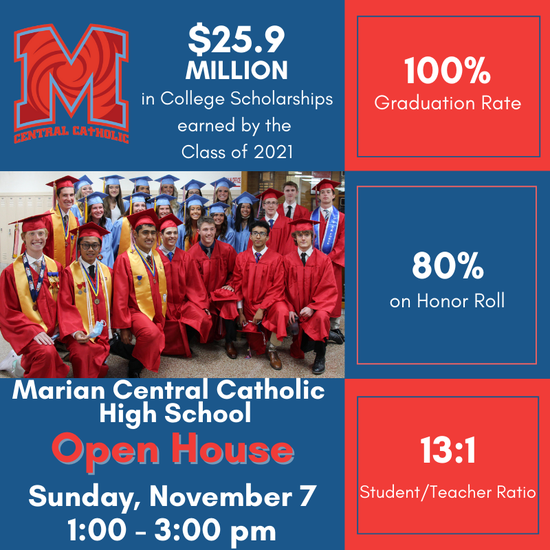 if you have a Christmas Tree that you are no longer using, we would be happy to take that off your hands. Marian Central will be participating in a community event which involves placing a Christmas Tree outdoors on our property. Please contact Kaitlin Bordeaux if you have a tree you are able to donate. Thank you. kbordeaux@marian.com

Next Week's College Visits in Guidance

All juniors and seniors may attend these visits. Students must receive permission from their teachers to attend each visit and must sign up for all visits in SCOIR.

Next Week in Sports

Fall Production - All Together Now

Tickets on sale at the door 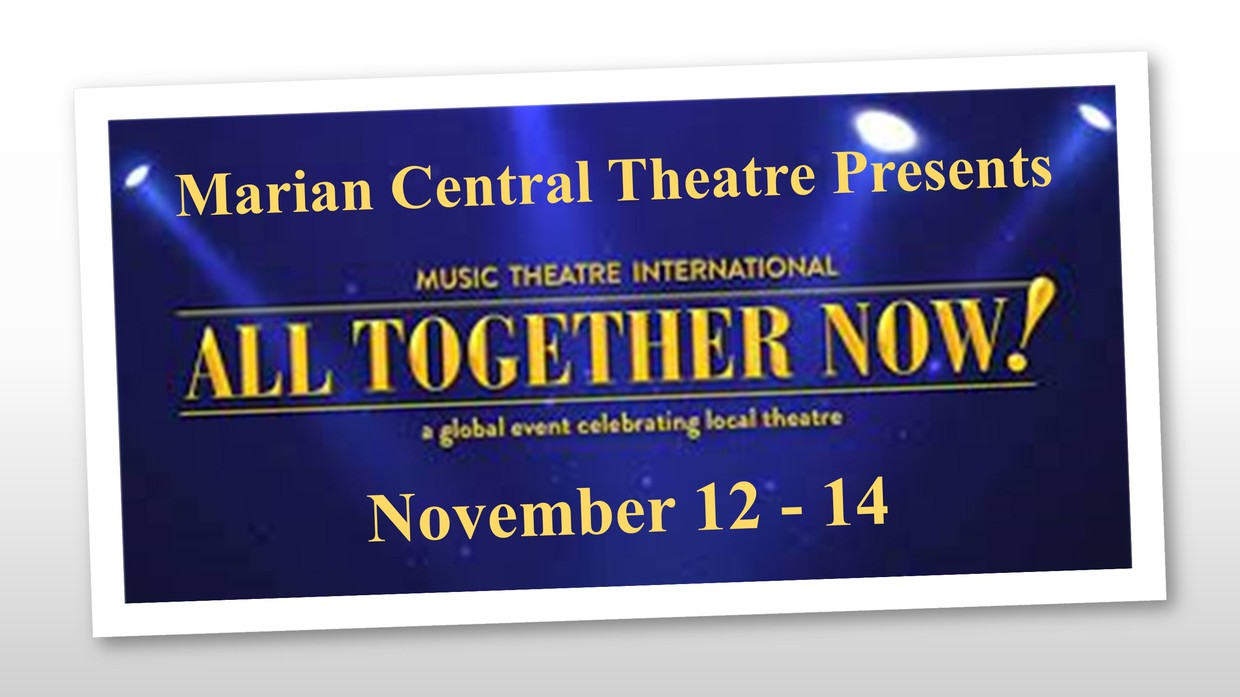 Winter Sport Pictures will be taken Thursday, November 11th. Additional information will be sent home with athletes next week. PrePay Credits for Individual Pick-A-Pose pictures can be purchased online at https://vickylongphotography.com/marian. 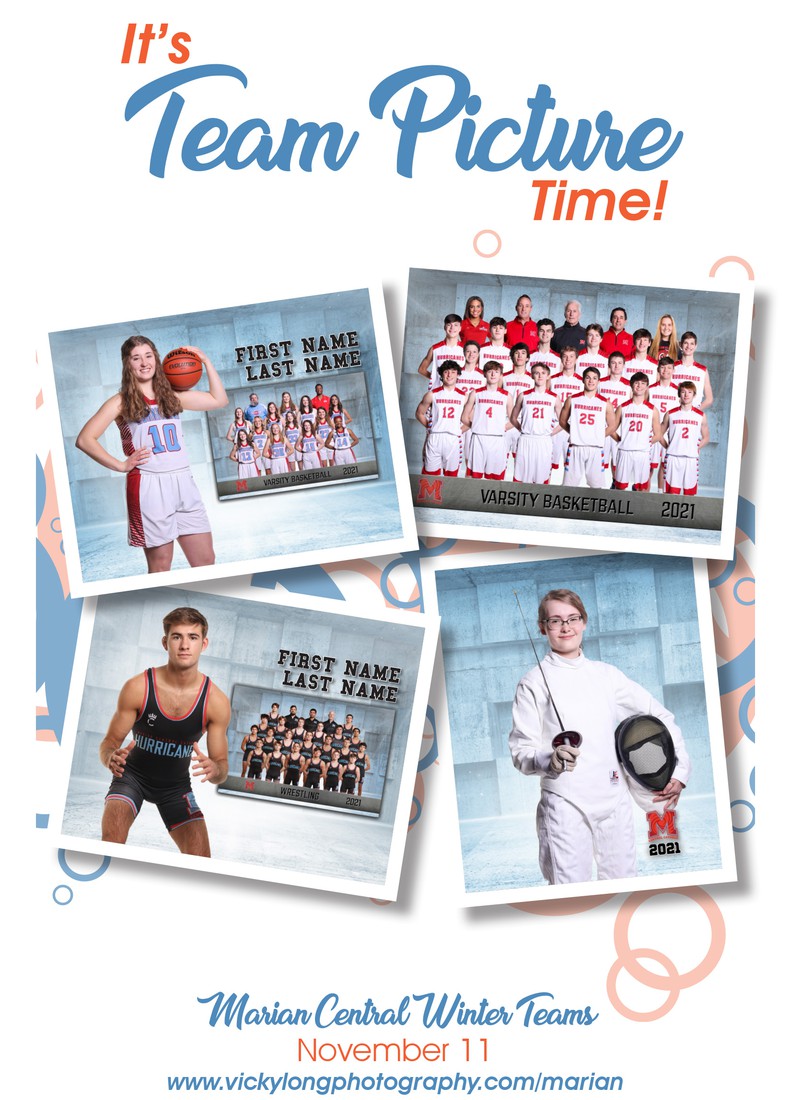 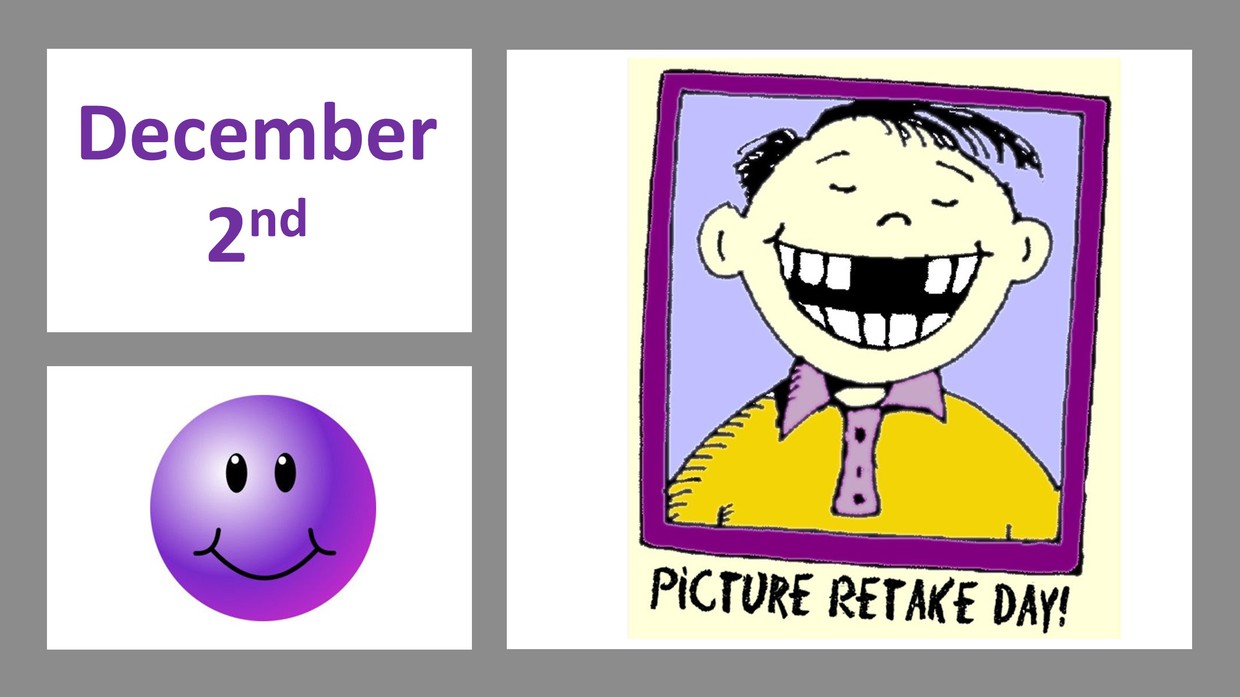