I decided on the topics that I chose for my multi-genre Projects because of the experiences i have acquired over my life time, I chose loyalty due to my friends, Wealth due to celebrities, and then power. I addressed loyalty in Beowulf, Wealth in Canterbury tales, and power in the pardoners tale.

I feel like I did well rhyming for the ballot, however i had a hard time coming up with thw drawing for Power, i had no idea what to draw.

I would like to try a graphic novel for Beowulf.

So i wrote about the importance of loyalty in this story. Every time that Beowulf was headed to combat he had help. He was loyal to hrothgar and therefore his loyalty got him some warriors to fight with. When we fought Grendel troops come with him same with Grendel's Mother. Even in beowulf's last hours as he fought the Dragon He was not alone, his friend Wiglaf was loyal to Beowulf, he was so loyal he received Beowulf's kingdom when he died.

In the epic poem Beowulf

there is a lot of tragic tales,

fight any wolves with tails.

Loyalty is an important

thing in this book,

if it wasn't. everyone

would be considered a crook,

From Beowulf to Hrothgar

, the king of the Danes,

From Grendel too Grendel’s Mom,

to something in this book,

when he breathes fire, he cooks.

So loyalty is a big part

in this tale of Royalty,

They Followed Beowulf with a high rank,

but would have rather drank.

They marched on as their swords went clank.

Beowulf was having none of grendel,

he was done he raised his tone.

He walked into the cave unarmed,

as if he was unalarmed of

Grendel the beast from Hell Dwelling,

WHAT IS THAT AWFUL SMELL.

It made his friends worriers

he was, going to kill these

But these warriors with their

power were not cowards,

they didn't leave their

leader to become a bleeder.

Grendel that beast from hell a lesson.

He took his arm caused

and for a while the killings ceased.

mother but she was no bother.

needed beowulf and his men,

Beowulf Knew his fate but was he too be ate?

Beowulf was losing his strength,

his life had been of long

length Wiglaf did not laugh.

“Take my necklace and the kingdom,”

Beowulf spoke then shortly after the great king Croaked

So I made an Ad or invitation about power, in the part of Canterbury Tales we read the narrator seemed to care more about people of higher power or class so I made this too show how the people only associated with lower class people when they absolutely they have too. Like in my invitation i included that the lower classes of people would attend to serve the people and know the royal family a little. They would not otherwise associate because of wealth.

As Knight of the royal Court I invite you to a formal meeting of the King and Queen of Genovia, This invitation of this great party is sent as a request of the new King and Queen, if you are a person of high power; a squire, Yeoman, Nun, Monk, Friar, Merchant, oxford Cleric, Sergeant at the Law, and the Franklin this party is perfect for you. Magnificent Golden decorations dangling by Red ribbons, The silver Glassware is marvelous, and the crystal China is divine. These decorations are of the most Expensive materials. The people of the Aristocracy and Upper class are more than welcome to attend. The people of the lower classes will be serving the upper class people, they have all volunteered and will all get paid this will allow for these people to meet the king and queen as well.

The Knight of Canterbury

So I drew a picture of the “Murder” seen in The pardoner's tale. One the left side i drew the young rioter headed to the town and picking up the poisoned wine. While on the right side i drew the other rioters with the same idea, kill the kid to get his money. So when the young kid come back they kill him. However the twist is is that they also drink the poisoned wine and it kills them both, So i drew the first man after he kills the boy and the second man is dead or dying from the wine. In real life however the things people “Kill” you over are not wine but just about everything else. 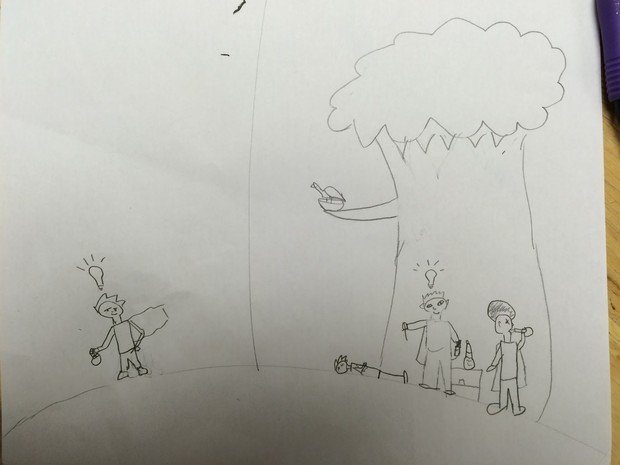