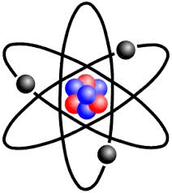 An electron is a subatomic particle that is found in every type of atom. Electrons have a negative charge and are bonded to a nucleus to form an atom. Atoms have the ability to lose and gain electrons. Atoms that have lost or gained electrons such that its electrons do not match the charge of protons in the nucleus, the atom is called an ion.

Electrons move around near the surface of the nucleus of an atom. They travel around in small orbits which contain either 2 or 8 electrons. The first orbit has 2 electrons and once that orbit is filled the next orbit forms. Each subsequent orbit holds 8 electrons and will gain or lose electrons in order to satisfy the octet rule. This law states that an atom will lose or gain electrons until its outermost orbit is full.