What is iron smelting?

Smelting iron is the process of heating a mined iron ore to separate the pure iron of the rock from the rest of the minerals in the ore.

The original iron ore when mined does not look all that different from any other rock. 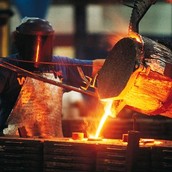 Iron must be heated to an extremely high temperature (about 1530 degrees Celsius) in order to extract the pure iron.

Impact on the Industrial Revolution

Although the Romans had figured out how to mass produce pure iron, the technique was lost in the fall of the Roman Empire and as far as we know, did not reappear again until it helped to make the Industrial Revolution a reality.

The British originally burned timber to produce the heat needed to smelt iron, but they depleted their forests much faster than expected because of the high demand. They needed an alternative energy source which was not wood-based, so they started using coal. This new innovation was encouraged by inventions such as Henry Cort's puddling furnace which used coal sources to purify iron.

The steam engine also came about as a result of the switch to coal-based energy as a method provide more air flow through the furnace. Later, the invention of the railroad combined both the steam engine and rails made of iron.

British's access to the natural resources of iron and coal helped to contribute to the Industrial Revolution's ability to start there. By the early 19th century, Britain was making about half of all iron goods for continental Europe.