Mckenzie is using Smore newsletters to spread the word online.

Get email updates from Mckenzie:

History of the ATOM

History of the ATOM

Daltons model was; all matter is compromised of atoms.  * It was created in 1803 Atoms cannot be made or destroyed  * All atoms of the same element are identical      *Different elements have different types of atoms        *Chemical reactions occur when atoms are rearranged     *Compounds are formed from atoms of the constituent elements

Thompsons model was called the raisin brand model, simply because it looked like raisins. He assumed that the atom was a spherical object with N electrons and a massive amount of poitive charge that cancels out the N electrons. It was created in 1898

Rutherfords Model was created in 1909 and it was the planetary model. He found that the atoms mass was in the middle, he realized this by the experiment he conducted. His experiment was shooting particles at gold foil.

The Bohr model was created in the 1913. Niels Bohr said that elections had some amounts of energy using Plancks Quantum Theory. His new model of the atom was where the electrons travel around the nucleus in orbits by their energy levels.

The Wave Model was created in 1925 by Schrodinger. His model wasnt a physical model but was rather a mathematical model. The equation helps predict some of the properties of the atoms but isnt able to describe the atom itself. 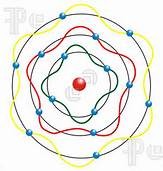 Mckenzie is using Smore newsletters to spread the word online.

Follow Mckenzie Varga
Contact Mckenzie Varga
Embed code is for website/blog and not email. To embed your newsletter in a Mass Notification System, click HERE to see how or reach out to support@smore.com
close