On January 23, 2020, Madina Academy was presented with an award called the Bridge Builders Award by the Town of Windsor Human Relations Commission. This yearly award is given to people or local businesses who “worked towards greater understanding of differences in Windsor” and made outstanding contributions to human relations. The event took place in the Council Chambers at Town Hall on Broad Street. Many prominent political figures attended. After the Mayor welcomed everyone and the Chairman of the HR commissions introduced the awards and the nomination process, each awardee was briefly introduced and got to say some words to the audience. This year, there were fifteen recipients! There were thirteen individuals, and two institutions, one of which was Madina Academy. Everyone had done great things for the town, and had contributed so much. For example, one senior girl named Shandel Samuels started a non-profit organization that focuses on helping girls with their insecurities and giving them a safe place to talk with other girls who might be going through the same thing. The Windsor Journal Newspaper was also given this award. When Madina Academy was called up to receive their award, Ms. Masuda stood up and walked up to the podium to speak. She told everyone that the Prophet Muhammed (SAW) said, “Faith has sixty to seventy branches, the best of which is to declare there is no God but Allah, the least of which is to remove something harmful from the road, and modesty is a branch of faith.” She said that this is what we learn at this school and that this is what we live by, that we should do any good deed, even if it is as small as removing something harmful from the road. When she concluded her speech, I was called up to read a poem called “Building Bridges.” When we had finished receiving the award, we sat back down in our seats, and the ceremony continued.

As I looked around the room, I could see all the different people and what they did. Being in a room surrounded by people that achieved so much to help others and to make Windsor a more welcoming community to people of all backgrounds, religions, and races and promote understanding and compassion among them was inspiring. They all pushed me to try to strive to be a better person. All of their stories came with a common message: “Always be kind and help the people in your community. It’s very easy.” 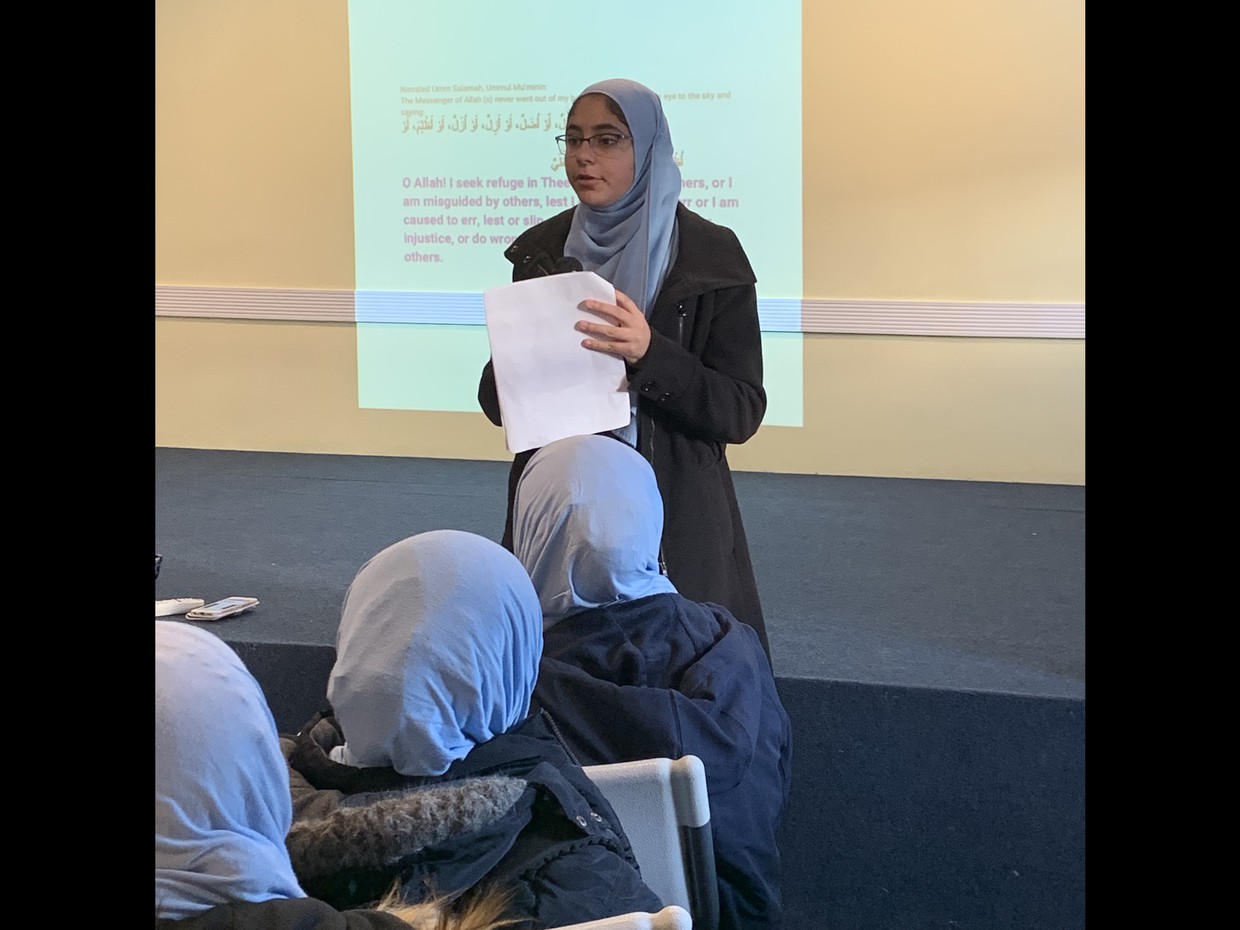 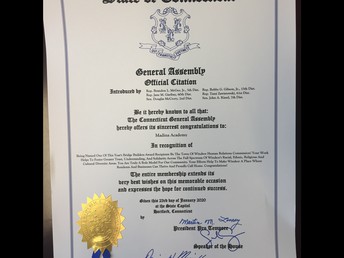 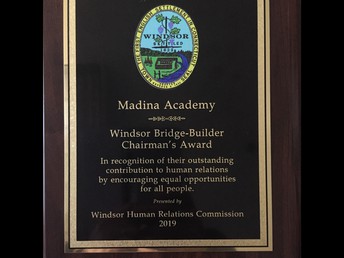 The dual enrollment program is one of the best programs Madina Academy offers. However, should it be mandatory? The dual enrollment program allows juniors and seniors to study at a college and prepare them for an environment that they are bound to enter if they are planning on attending college. The program also gives students an opportunity to study a wide variety of subjects that are not available in a normal high school or at Madina. For example, if a student is interested in mathematics, they can take all of calculus and differential equations by the end of 12th grade. In any other high school, the highest level of mathematics students are able to take is Calculus I. There are many benefits to the dual enrollment program, but for some individuals, the cons outweigh the pros. Some students and parents believe the dual program is too academically rigorous, and they would prefer to not participate in it. Other parents find the commute difficult. The dual enrollment requires one’s parents to be prepared for more morning travel, especially if they have other children that aren’t in the program that need to be dropped off first. Madina Academy should offer another option other than dual enrollment which gives parents the opportunity to still have their kids in an Islamic environment without the stress of tougher academic standards and a longer commute.

Reflection on Assembly by Madina Saleh- edited by Sameen Sabir

Madina Academy has been adding more and more to the daily assemblies. The students have been reintroduced to “Caught Being Good” every Wednesday where two elementary and middle school students and one high school student are nominated by either a teacher or a student when they’re caught doing something good. They’re then called out in the morning, honoring the good act they’ve committed and rewarded with chocolate. Marriam Khan, Amer Kabatilo, and Zain Kabatilo in the 9th grade also recently put together a presentation about not insulting your brother or sister in Islam, respecting people’s privacy and not interfering with them, and making peace between two people who are fighting for Br. Abdulmalik’s class. Insha’Allah as the new year goes by, we will continue learning more and more and continue being prepared to start off the school day positively. 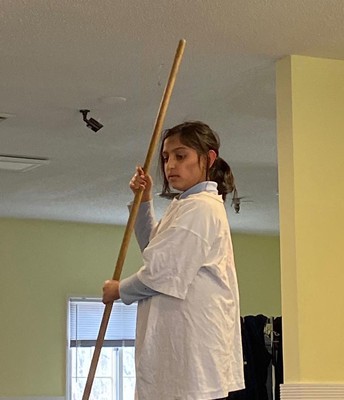 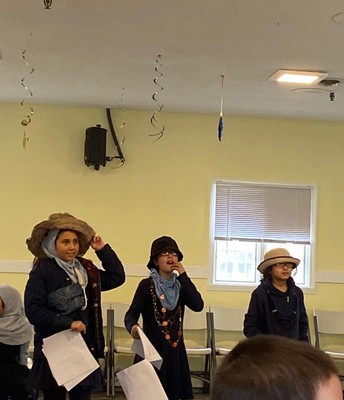 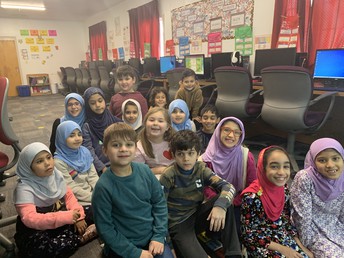 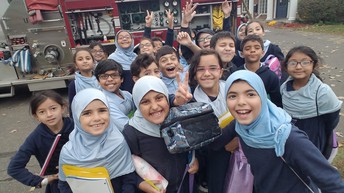 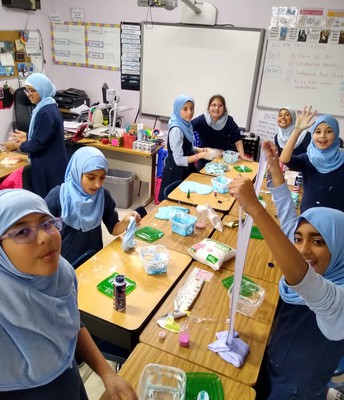 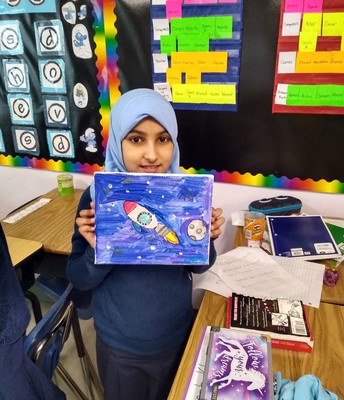 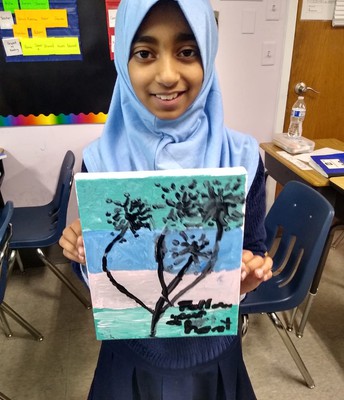 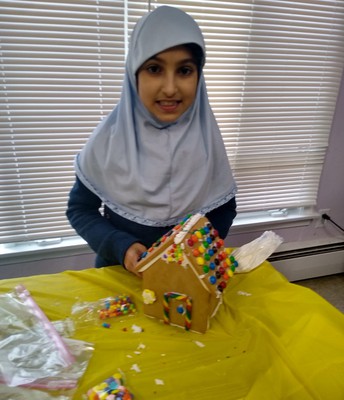 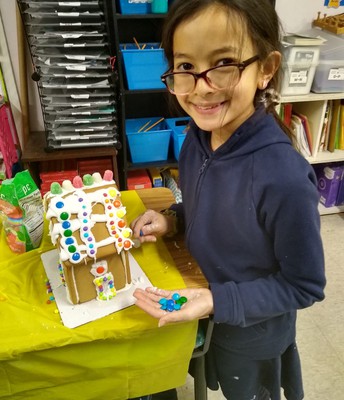 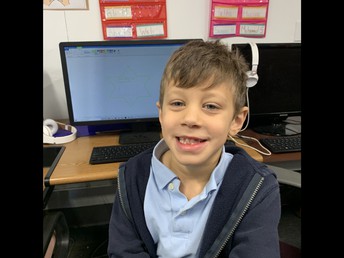 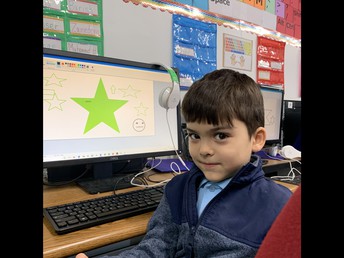 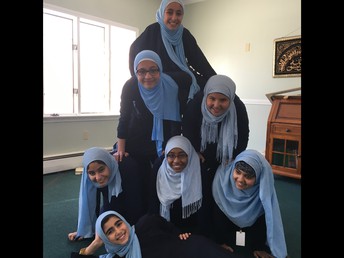 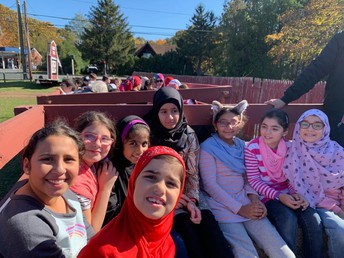 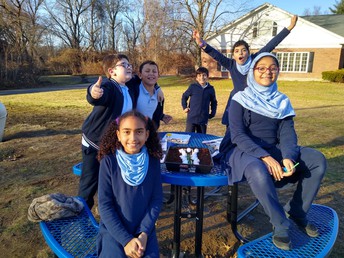 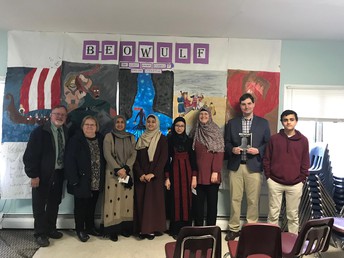 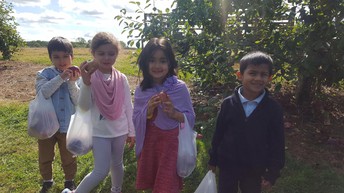 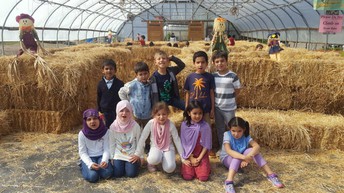 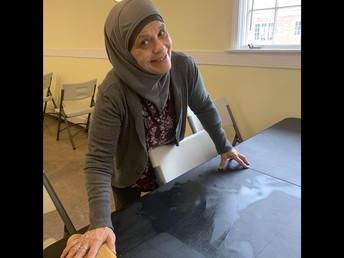 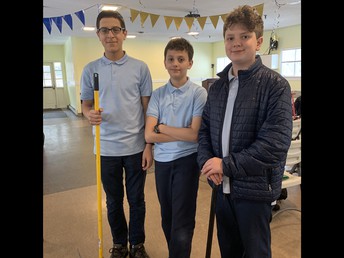 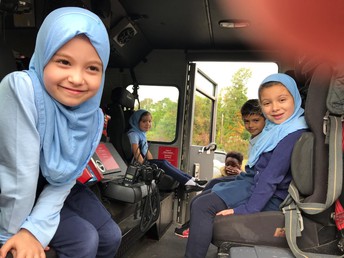 STUDENT OF THE MONTH: SAMI MEMON

" Sami always does his work, follows directions, listens in class, always raises his hands, and we have never seen him being impolite. He is empathetic and always ready to lend a hand." 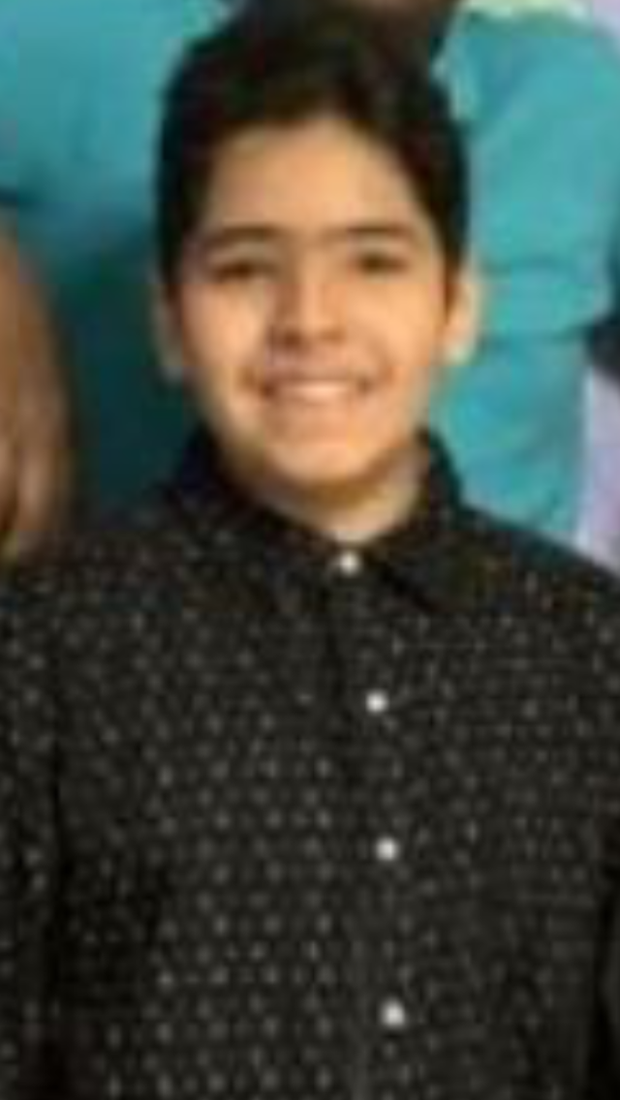 Rahma in 2nd grade made remarkable connections with the book she was reading. Her teacher knew this was "Newsletter" worthy! 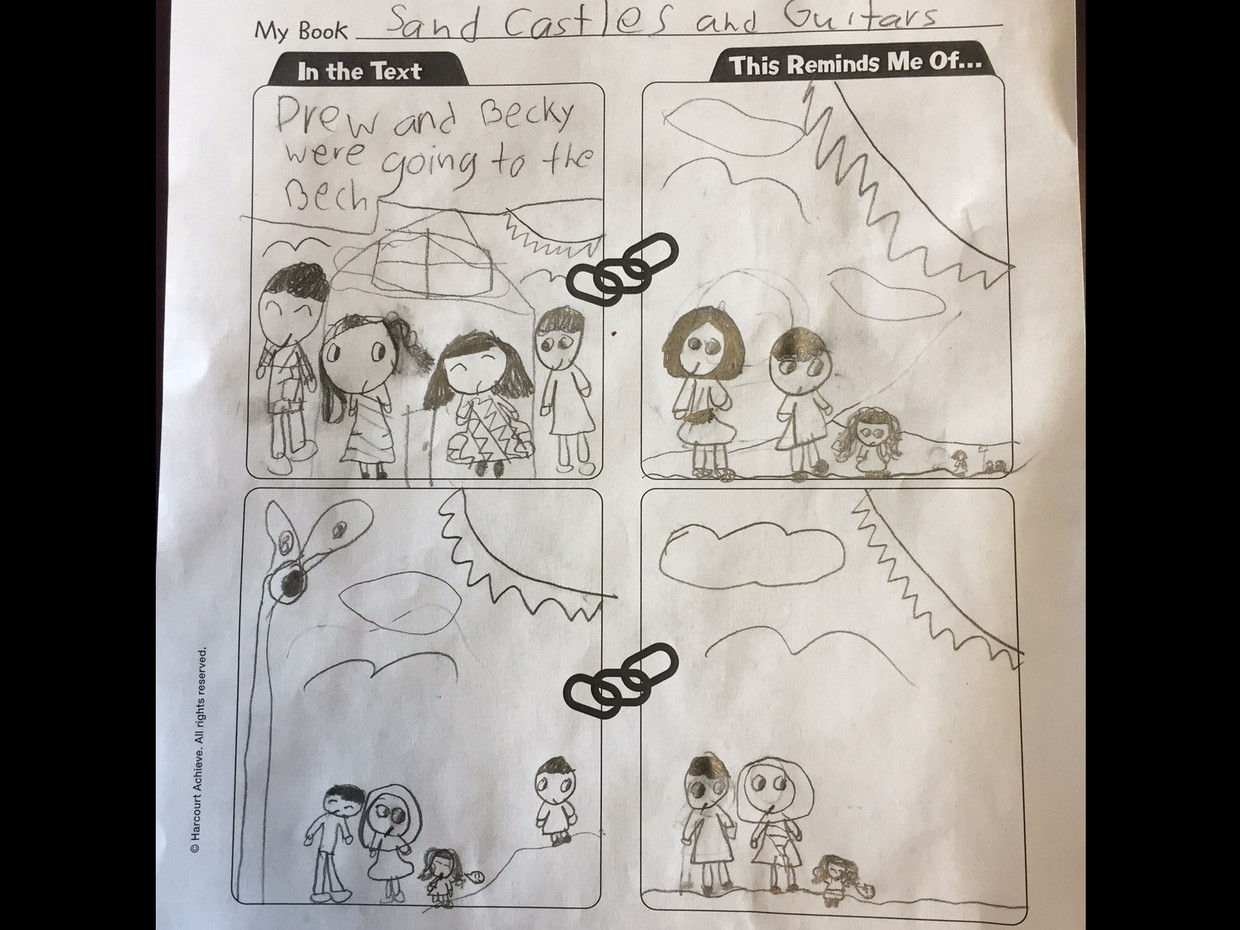