State of the Second Tier

After five weeks, the separation continues. Omar remains undefeated at 5-0, with an average of 165.4 points per week. Kyle is averaging around 12 points per week, and there's still a decent sized pack in the middle. Commish Fave Manginas actually bumped up a spot after a loss - that's called hustle and flow for all you wanksters.

From the Desk of Dr. TBS: 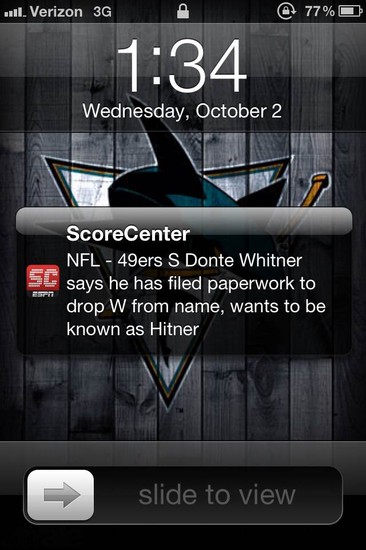 WINTER IS COMING, AND SO IS MIKE SAKSEN - IT'S TIME FOR MATCHUPS!

My only solace was watching him bungle yet another game in the waning moments - TAKE THAT ROMO.

But FUCK, his wife is SO hot.

And so it was prophesied, and so it has happened: Michael Vick is in phase one of his two-phase season-ending injury. "Dog, I'm fine, I'm gonna play. But I'm gonna run straight into this cornerback on my way out of bounds *crack* oh shit my rib cage exploded I'm dead." Zack has some decisions to make, but has built a 4-1 buffer of homoeroticism around his team which should last at least a few weeks. On the other end of the spectrum is Kyle, who is in dead last with no signs of hope. There have been worse weeks for the Eskimos, but the lack of consistency is a true killer. 5 combined points from Fitz and Colston is also a saucy caper. Don't worry Kyle, I will be there tomorrow night to dry your tears with my butterfly kisses :D In the meantime, I'll let this warm you up

This Dish was brought to you by Kyle and Ged, who approve this message 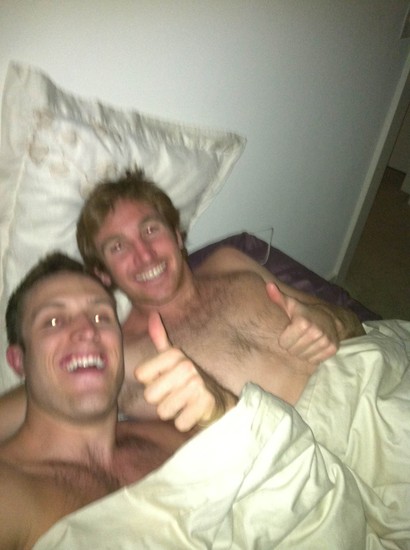 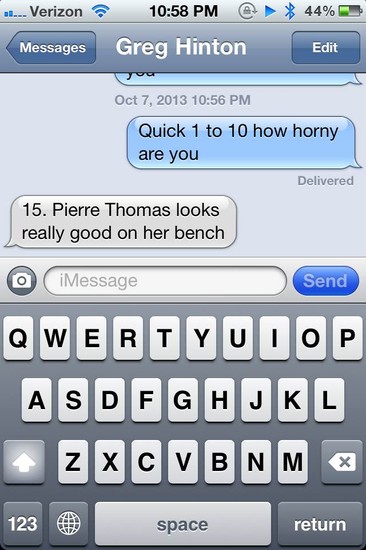 Mmmmmmmm you know what they say: "Live by the Pierre Thomas, Die by the Pierre Thomas". Last week Thomas was Jess's knight and shining dental dam, this week he was the sole reason Greg was able to march his cheese parade right down main street. Greg attacked the Vulva Squad from multiple angles, but the double pronged TE assualt was not in Greg's repertoire this week. Once again Jess is plagued by QB probz (see: Manginas), but got fairly consistent production throughout the rest of her lineup. Greg faultered across his RBs, but Dezzy Wezzy and the QBs remained erect enough to carry him to the romance explosion land.

Jess remember that time you scoffed at my prognostication skillzzzz? DO NOT EVER DOUBT ME EVAR EVAR I AM OMNIPOTENT.

See you at the TG in a week and a half?

Yet another devastating loss for Shane this week, who falls to 5th place. Eeee, it probably wouldn't do much good to mention San Fran's defense at this point, would it? (*Eli face*) Keenan Allen had a breakout game for the Chargers during the Monday late Nacht Football game, and plopped his points squarely on Spencer's bench too. And then there was Peyton, he had a few points. Omar and Spencer deserved to play each other this week, fuck this shit. Spencer you're so lucky you squeaked by with a win during AP's bye week. Fuck all of this.

JUGGERNUT ACHIEVED. Steve evacuated his Brazilian nightclub this week in a five-alarm krimmplosion all over Austin's butt cheeks and teeth. Once again Austin takes it on the chinpokomon, all while achieving the second-lowest score this season. Congratz on dem, congratz on da big winz.

I really like how the bottom half of Austin's roster went 1-2-3-4-5, that's extra cute. Turns out Matt Bryant did not score 15 touchdowns. He was close though, he got zero. Steve cashed in on Arizona's defense, which was fortunately playing Cam Newton's high powered offense. Anti-nirvana: Austin would have hit a respectable 100 had he played Randle over Thompkins, but hey Eli is a piece of shit so close your eyes and throw the dart.

Schme's Manginas: Hmmm I appear to be the underdog here (course), but I can't break my rhythm. I expect a MONSTER weeks from both Eli and Cam. Oh yea. Manginas 142, Utes 135

Don't Get Sanduskied: This will be a sassy matchup, and I think Omar's time is finally up. After I loosened him up for Zack of course. Jerry 155, Hate 138

Vag Bros: Kyle things will probably get worse before they get better :( DOES THIS MAKE YOU HAPPY JESS???? Hubris 133, Eskimos 119

Tomorrow Catboi and I will be boarding a jet plane to Menver to take part in our third Great American Beer Festival. I will do my very best to procure naked pictures of Matt, Zack, Kyle, and Charlie.

In the meantime, you can all go blow yourselves.

Follow Michael Gedestad
Contact Michael Gedestad
Embed code is for website/blog and not email. To embed your newsletter in a Mass Notification System, click HERE to see how or reach out to support@smore.com
close