jada is using Smore newsletters to spread the word online.

Get email updates from jada:

Who is Marlene Sanders?

Who is Marlene Sanders?

Marlene original started out as an actress, and then later on is when she met Mike Wallace and starting to working as an assistant. Mike Wallace was an American journalist, game show host, actor and etc... After working on twice-daily news broadcast, she started to move her options around and reported back from Vietnam. A lot of people might have been surprised because broadcasting and things like this is more of what men do in society eyes. Not only was she journalism she was also an author and won 3 Emmy’s awards; Marlene also known as professor journalism. She wrote hundreds of documentary for “ABC”, later switched to CBS as a documentary correspondent/producer from 1978-1987. 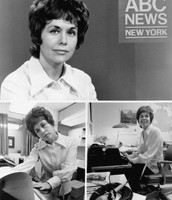 when she was assistant news director,

The way she would like to be remembered as!

jada is using Smore newsletters to spread the word online.