On September 8, 1941 the Siege of Leningrad started that lasted almost 872 long days. German forces didn't directly attack the city. Instead they bombed their warehouse where all there food was and let the city die of hunger and the harsh winter conditions. After 64,000 people had died from hunger and the winter, Germans started to attack the city by air and artillery attacks. From the lack of food people started to use a walking stick to support them. Major Lozak gave away half of his ration cards to older people so they wouldn't die. Lake Ladoga had frozen over allowing food supplies to be brought to Leningrad. Also it allowed to evacuate weak and elderly out of the city. January 1944 the Red Army had pushed the Germans out of Leningrad ending the siege with an estimated 1,000,000 residents dead.

A harsh winter in Leningrad led to water pipes freezing and breaking. People were without water and it was hard to find water that hadn't frozen. When Lev, Vera, and the twins found the flask of the fallen German it was like they were in heaven. When they drank what was inside they said it was "warmth in the belly(page 15)." This was one of the only things they have had to drink in a while. The winter also lead to more death. The German that they took the flask off of had froze to death when he jumped out of his plane (page 15). 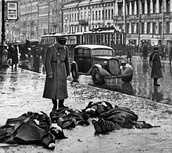 The Germans bombed Leningrad's warehouse where all their grains were leaving people to find their own food(page 11). The bakers didn't have anything to make bread so they would add anything that wouldn't poison them. The bread tasted like sawdust and was hard from the cold(page11). People of Leningrad would stew pigeons and even roast their own pets(page 7). Lev, Vera, and the twins would spend their extra time hunting down rats to have for dinner(page 10). Some even ate each other. Lev and Kolya were in the giants home looking for eggs when they saw meat hanging from the ceiling. Lev thought it was pig at first but then realized it was human meat hanging from the ceiling waiting to be eaten(page 59).

On top of letting the people of Leningrad starve, the Germans would attack the city with air and artillery strikes.

According to the City of Thieves, they which included Lev, Vera, and the twins consumed items like pigeons, family pets (page 7), rats(page 10), and ration bread(page 11). Some people even ate other humans(page 59). They were forced to find there own source of food. The ration bread tasted like sawdust and was hard from the cold. Peoples rations of food were cut to 1/3 of the amount someone needed to live. Many lost family and friends from starvation, the winter, and bombardment from the Germans. They had to find a way around this, they had to let go. The apartment that Lev had lived in collapsed from bombardment. When he returned to the apartment all that was there was a big hill of concrete that once was his building. He couldn't believe that he had lost his building and he had no clue if Vera and the twins had survived(page 68). He had to keep going because he had to get eggs for the colonel.

Before the war- Real Historical from the Novel

Before the war was like paradise. People in Piter could have all the food they wanted(page 7). The food was made of what it was supposed to be made of. They had now worries in the world. Levs mom and sister fled to Vyazma to get away from the invaders and the bombers(page 8). He wanted to stay and help defend his city(page 8). His dad got killed because he was writing about Joseph Stalin. He made fun of his fingers and mustache(page 34).

There was no more fire wood in the city. People started to tear down every wood sign and floor board in the city for firewood(page 7). They had to find their own food. Lev, Vera, and the twins had pigeons, rats, family pets, and ration bread (page 7, 11). During the war Germans would sometimes take advantage of women. If they were to leave the Germans would punish them. When this happened to Zoya she ran away(page 130). The Germans followed her footsteps and brought her back to the farmhouse and made the other girls watch while they cut off her feet(page 131, 132). 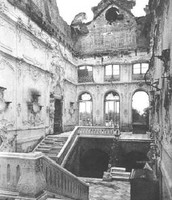 After war there was finally food and no one had to eat their family pets anymore. Lev and Sonya were drinking wine(page 256). Vika had brought Lev a dozen eggs(page 257). They had all the food they wanted. Lev had learned that most of the people living in his building got to leave before the building actually collapsed. He go to see the twins again after he thought he would never see them again. His mother and sister came back(page 256).

Germans caused many physical and emotional scars on the people of Leningrad including Lev and Kolya. People had many physical and emotional challenges during the war. The Russians trained sheepdogs to go through the woods and find food underneath tanks armor. They were land mines. This meant that they were starving them. When the dogs saw panzers they knew they were getting fed and run towards them. The Germans knew all about it so they would find the dogs and shoot them(page 111). Lev and Kolya were walking through the field on the enemies side and found a large pile of these dogs(page 110). The Russians were starving these dogs for weeks(page 111). When Lev and Kolya found the one dog that had been shot and was trying to get to the woods, Kolya cut the dogs throat so it wouldn't have to suffer anymore(page 111). Also Germans would take control and abuse women. At the farmhouse Lev and Kolya were told a story about what the Germans did to the girls that were there. Every night German officers would come to the farmhouse and take advantage of them. One girl named zoya was the ones that they would touch and take advantage of because she was only 14. One night she tried to runaway and the German followed her and brought her back. When they go back with her they cut her feet off and let her suffer(page 130, 132,132). After hearing this Lev and Koyla were afraid that was going to happen to them and to the girls. Another factor that caused physical and emotional scars was the lack of food. The lack of food is why Lev and Kolya had to go on the long journey to find eggs for the colonel. Lev ends up playing Abendroth in a game of chess to get the eggs for colonel. Abendroth tells him that if Lev wins he can have the eggs and set Vika free(page 224). Lev likes Vika and knows that he needs to win so they can get the eggs and so at least Vika can win. All along Lev, Kolya, and Vika really want to kill Abendroth. When Lev is playing he pulls out his knife and starts to fight with Abendroth. While he is fighting soemhow Lev ends up loosing part of his finger(page 230).

The physical and emotional scars that the Germans left stayed forever and haunted people. People were starving and trying to get away from what the Germans were doing but they ended up getting punished. They would kill them or find other ways to torture them more then they already have been.

War changed how many people look at things. It changed how people acted. War helped Lev finally become a man. At first Lev would back away from different things and avoid them. When Lev and Kolya went in to the cannibals apartment they didn't know what kind of meat was hanging from the ceilings. When they realized that it was humans cut up being ready to be cooked they tried to get out. Lev and Kolya realized the real reason why the giant had wanted them to go upstairs and when the cannibals started to try to kill them(page59). Kolya knew that Lev would never be able to kill someone so he told Lev to run and get out of the building(page 60). He wasn't capable at the time to kill anyone he would just back away. Throughout the war Lev learned that he had to do anything to survive. During his game of chess with Abendroth he knew that he had to kill him because that was the only way he and his friends were going to survive. When Abendroth was right on top on Lev, Lev knew that was the time that he needed to kill him to save him and his friends from the Germans(page 231). He finally did something before the war he would have not done at all. War made him angry and changed his reactions. Lev before the war was know as a boy that wouldn't stand up for anything, know he is the boy that will do anything because of what he experienced.