One of many stories

One of many stories 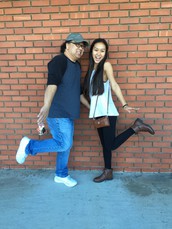 Raul Romasanta immigrated from Manila, Philippines to America when he was 12 years old (1976) and is currently 52 years old. He grew up in Duarte and attended Duarte High School along with his two older brothers. Life was not easy, and tremendous sacrifices were made in order to immigrate to America.

Raul Romasanta petitioned alongside with his brothers by their father to come to America. It took about 3 years to get an approval for a visa number. Him and his brothers all got approved and were on their way to America as soon as they got approved. They hopped on a plane to travel to a place in what their future had to offer. Sacrifices were made when my father had to leave his mom, friends, and family to live a better life with better opportunities.

Once Raul came to America it was a struggle for him to adapt to the new atmosphere. He said "The education systems, the government, and the way of life were completely different." Raul's goals when coming to America was to "finish school, get a job, start a family, and to learn the ways of becoming a model American citizen". In the Philippines majority of the population was Catholic and when Raul came to America he was exposed to different religions. He states " It's amazing and shocking to see how diverse America is".

The language barrier was one of the most difficult struggles when Raul first came to America. He used to record his voice to make sure he was pronouncing words correctly. He would listen to popular music, wear clothes that were in trend, and mimic how everyone else acted to blend in as a normal American teenager. This new lifestyle made him learn more about America and it's government. He learned more about being an American, and was fascinated by the fact that we have rights, and freedom. Raul stated that" I am grateful for immigrating to America because if I would've stayed in the Philippines I would not be as successful and happy as I would be today."

Between the 1860's and 1910's the U.S's population tripled in size. Over 20 million immigrants from Chine, Southern and Eastern Europe immigrated. These people had common goal of a better life. Some wanted to escape difficult conditions such as hunger, religious purposes, political prejudices, or to simply have a stable job to provide for their family.

Raul Romasanta had a similar goal. He wanted a better life and to escape a destiny of not having a successful life. His main goal was to start a family and to provide his kids privileges that he couldn't get growing up. Raul's childhood was rocky, living in poor conditions made him more determined to change his life around.

Here is a picture of my dad visiting his old high school that he grew up at when he first moved to America! At this place, he went through struggles in learning a new language, making new friends, and overall adapting to a new atmosphere.

"Living in America has given me a family to love. One of my goals in moving to America was building an amazing family of my own and to give them everything they need in being successful. I wouldn't trade anything in the world seeing my family happy."- Raul Romasanta

My dad has sacrificed a lot in order to live a better life. He knew the difficult decisions that had to be made to have an education. He worked and pushed through that era of time and now is successfully living his life with a stable job, wife and 3 kids.
Paste in your blog/website to embed.