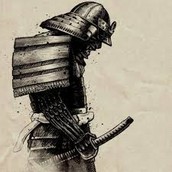 Throughout ancient Japan a social structure was almost always used. On top were the royalty, and rulers of a dynasty. They had complete control over all of Japan. However to make the land easier to rule they would give sections of the land to Nobles. The Nobles would represent their province in meeting and help establish laws for their specific Province. However the backbone of the Japanese society had always been the samurai. The Samurai had been given land to Farm by the Nobles. in Return the Samurai would Protect the land as policeman and authoritarians. At the bottom of this social structure was the every-day people. Who would farm the land and receive governing from those above them in class.

Samurai made up the Japanese Military Fighting on Horseback with a bow, and a sword. Protecting the property of their governors Samurai were forced to follow a strict code similar to European knights; known as Bushido. Bushido was taught to the Samurai's to influence their views and outlooks on life. Teaching them what was right and wrong and the Morales that they needed for their job. Bushido was to become a Samurai's personality.

Samurai and Bushido had a major affect on life in the time period, both of which were astoundingly hand in hand with one another. Samurai would help keep peace for the peasants while they worked the land, for everyone, the governors would come up with laws to rule the land. The system worked, each branch was hand in hand with another.

Bushido is a unique way to govern a society. Instead of having a person's own Morales govern a society to help them decide what is just and unjust people were expected to live off the samurai code Bushido to shape their personalities, beliefs, and Morales. ideally if everyone were to follow the code no laws would be broken.

Throughout the years as a Samurai I've yet to understand why people break the law. No Crime outweighs the punishment of our morality. I became a Samurai because I was chosen and taken from home as a boy to begin training. Much of our training was of learning the correct morality and outlook of the world through the code Bushido.

Even today Bushido sticks with me, Going about my every day tasks, patrolling the area and listening to the needs of other Peasants. I know what is right and wrong for the people and for all of Japan. Should a person commit a crime I know what to do. One of my most demanding jobs however is being able to fight as a military for Japan.