maddie is using Smore newsletters to spread the word online.

Get email updates from maddie:

~The mainland is separated from the rest of Asia by mountains and high plateaus.~


~The river valleys, that were separated by the mountains, were home to early civilizations~

~All the trade had to pass through the straits near the southeast region. Whoever was nearest controlled the routes resulting in Southeast Asia controlling lots of trade routes.~


~Since they were so isolated, the had their own religious and cultural patterns.~

AN AWESOME FACT ABOUT SOUTHEAST ASIA!!

~When visiting Angkor, in Cambodia, you can ride an elephant from the South Gate of Angkor Thom to Bayon temple!~

~The most productive metal trade in the tropics was iron-working, which provided the hoes, axes, and knives farmers used to clear their fields.~

~Between 1200 and 1500, the rain forests of coastal Southeast Asia were opened up for farming.~

~An abundance of crops grown in the fertile river valleys and deltas brought wealth to the mainland of Southeast Asia.~

~During the 1100’s and 1200’s the Khmer flourished along the Mekong River and covered most of the Indochina and Malay Peninsulas.~

~Southeast Asia can be divided into 3 parts: Western mainland (Myanmar, Thailand, and mainland Malaysia), Eastern mainland (Vietnam, Laos, and Cambodia), and Maritime, which is essentially the islands, (maritime Malaysia, Indonesia and the Philippines)~

~The Khmer empire was huge and was located where modern day Thailand and Cambodia are today.~

Check out some of the great maps below! 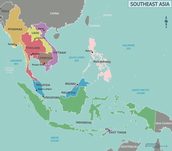 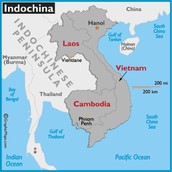 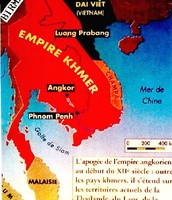 How was their society organised and how well did it function?

~The people of Southeast Asia developed their own cultures long before the Indian or Chinese influences shaped the region.~

~They lived in isolated villages, they followed their own religious and cultural patterns.~

~Many societies were built around the nuclear family rather than extended families of India and China.~

~Women had greater equality in Southeast Asia than elsewhere in Asia. Female merchants took part in the spice trade, gaining fame for their skill in bargaining, finance, and languages. In some port cities, the woman gained enough wealth and influence to become rulers.~

~A excepted custom was the inheritance through the mother, or called matrilineal descent.~

~Women had some freedom in choosing or divorcing their marriage partners. Even with the Indian and Chinese influences, women retained their traditional rights.~

~The Religion of Buddhism was one of the many exports India had a big impact on the people in Southeast Asia.~

~Strongly influenced by India and China.~

~This new religion came with an influence of writing, law, government, art, architecture, and farming.~

~After Hinduism and Buddhism came to Southeast Asia, the Indians brought over another religion, Islam.~

~Muslims ruled northern India in the 1200s and it spread Islamic beliefs and Muslim culture in the islands of Indonesia to the Philippines.~

~Today, Indonesia has the larges Muslim population of any nation in the world.~ 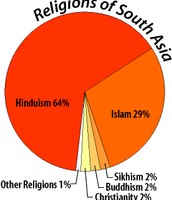 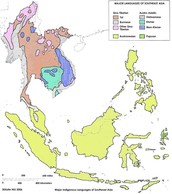 ~Southeast Asian languages are also called Austroasiatic the is spoken by about 80 million people.~

~Three subfamilies: the Mon-Khmer languages, the Munda languages, and the Annamese-Muong subfamily.~

~There is no proof that these groups are from one ancestor language which is the essential requirement for classification in the same linguistic family.~

Kingdoms and Empires from the 1200's

-King Anawrahta is credited to bringing Buddhism to the Burman people.

-Pagan flourished for some 20 years after Anawrahta’s death.

-The ruins that survived today are among the most impressive in the world.

- Both hinduism and buddhism reached this empire.

maddie is using Smore newsletters to spread the word online.