Home of the Panthers

Home of the Panthers 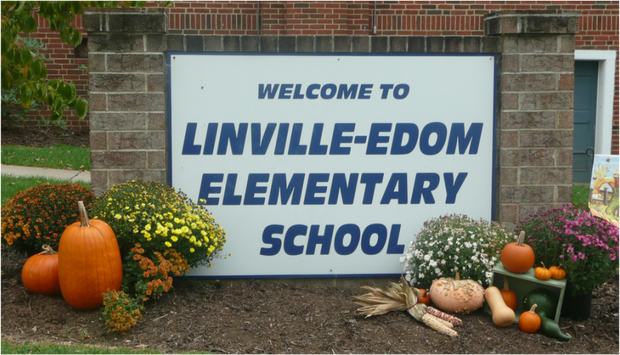 Welcome to Linville-Edom Elementary School! The faculty and staff at Linville-Edom are committed to providing each child with the best education possible. We are very excited about our school program and the opportunities it provides. We strive each year to provide the academic foundation and well-rounded education each child needs to be a successful learner once he/she leaves our school.

The task of educating children requires a partnership between home, school, and community. We encourage you, as parents, to become actively engaged in your child’s education by joining and participating in the Linville-Edom PTO, attending parent conferences, chaperoning field trips and volunteering in your child’s classroom. We welcome your input and suggestions as we work together to make each school year a very exciting and successful year for your child.

To provide the foundation for a lifetime of learning
in a safe and caring environment that emphasizes
mutual respect, responsibility, and high expectations.


The Linville-Edom School community is devoted to
the accomplishment of this mission. 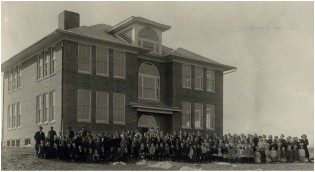 Linville District was the only district in Rockingham County, Virginia that had not availed itself with high school accommodations. However, several of the elementary schools were offering a limited amount of studies on the high school level. All of those who desired further public school training had to go to Harrisonburg or to a school in another district. By 1910 sentiment was sufficiently aroused in favor of a high school in the district. A.A. Howard, S.R. Bowman and John S. Funk, members of the Linville District School board and members of the Rockingham County School Board, led the movement to get a building under construction. They were assisted by W.S. Armentrout, Harry Hosaflook, Henry Holsinger, D.R. Miller, John W. Myers, D.C. Myers, W.E. Pennington, C.W. Burruss and Isaac Wenger, who were interested patrons of the school.

This new school was named the Linville-Edom High School and was the first consolidated school in Rockingham County. The pupils came from the following schools: Linville, Edom, Pultz, Wenger and part of Simmers Valley. The remaining Simmers Valley pupils went to Broadway and Tenth Legion Schools. Greenmount and Cross Roads Schools were closed later and the pupils were brought to Linville-Edom. Professor Emmer R. Shank of Singers Glen was the school's first principal.

Land was offered gratis on which the new school could be built , on top of Beard's Hill east of Edom by Mr. Jacob Beil, grandfather of Mr. J.O. Beard. This offer was not accepted because of requests of some Linville patrons, that the school must be built at a mid-point between Linville and Edom. Four acres of land were purchased at $100.00 per acre from Mrs. Minnie C. Miller. To facilitate ample space for playground and athletics, two additional parcels of land were purchased at later dates, making a total of 5 acres.

It is interesting to note that in order to establish a point half-way between Linville and Edom, several interested citizens put a wheel on the end of a pole, pushed it from Linville to Edom and counted the number of revolutions made by the wheel. They divided this number by two, thus they were able to establish the exact midpoint, which is in the middle of the east cement steps and walk that lead to the front door of the new building.

The new building was built of brick that was fired on the grounds. The foundation was built with limestone, quarried also on the school grounds. The building was composed of six classrooms, an auditorium, toilet facilities and a central heating system and cost approximately $10,000.00.

The new Linville-Edom Consolidated School opened its first year's session in the fall of 1912, with seven elementary grades and one year of high school. The first faculty were E.R. Shank, Principal: A.K. McMullen, Bertha Myers, Annie Wenger, and Kate O'Conner.

The second year of high school was added to the curricula in 1913. Mr. Shank taught all of the high school subjects. Subsequently, in 1914 the third year was offered, at which time Mr. J.O. Beard joined the teaching staff for a period of three years and was then followed by Miss Mary Dawson. The first graduates of the three year school were Walter Armentrout and Pauline Fawley.

Sufficient interest in the new school had been generated by 1920 to make Linville-Edom a four year high school. This necessitated a third teacher and Pauline Fawley (Mrs. J.O. Beard) was employed. This year's graduates were Ralph Myers, Luther Gowl, Cecil Kingree, Ora Lawson , and Mildred Shoemaker. The morning following the commencement exercises in May 1921, a veil of sadness hovered over the Linville-Edom School and community because of the tragic death of their principal, Mr. Lucius (Mike) Fletcher. The high school faculty, graduating class, and some high school pupils had planned a picnic at Rawley springs. Mr. Fletcher was accompanied by Miss Mary Dawson. They left the school for the picnic, with the intention of going by Linville and Harrisonburg. But at the local railroad crossing his Model T Ford stalled on the track and it was demolished by Southern Railroad train. Miss Dawson managed to get out of the car before the train struck the car but Mr. Fletcher was not so fortunate.

Due to the increase in enrollment and offerings it was necessary to build two additional rooms, one on first floor and the other on second floor. The cafeteria was built in the basement later.

About 1910 Mr. Joe Clem equipped a covered road wagon with benches and hauled the children from the Wengers School community to the two room school in Edom. He continued after the Edom School was closed transporting the children to the new consolidated Linville-Edom School for several years. It has been reported that a pupil asked Mr. Clem to make his horses go faster or they would be late and he replied that he only had two speeds, this one and the slower one.

Many students commuted to school on horseback or in buggies. It became necessary to have shelter for the horses, so the patrons furnished lumber and labor to build a shed composed of about 25 single stalls. Some rode on horseback while Mr. A.K. McMullen commuted in the buggy. Pauline Fawley left her horse and buggy in the "drive-in" stall. Mildred Shoemaker and Vallie May traveled to school in the buggy. Mr.S.R. Bowman's five children traveled in a two horse covered spring wagon and P.I.Garber's children used the surrey. The buggy was the vehicle generally used by the children from the homes of W.S. Armentrout, S.L. Garber, Henry Holsinger, D.R. Miller, Dee Myers, Will Pennington, R.E Pugh, Jake Wenger and others. Miss Ora Scott, an elementary teacher brought the Thompson children in her buggy.

By 1930 the horse was almost replaced by the automobile and the school bus, which meant that there was not further need for the horse shelter and it was in time razed. Three school bus routes were organized for transportation of Linville-Edom pupils from 1931 to 1935. J.C. Craun was first to drive a bus then later Carl Garber and Dave Crider. In the summer of 1930, patrons and friends donated their help in removing the ledges of limestone and grading the school ground. The women of the community gave encouragement of the project by furnishing meals to the workers. The Linville-Edom Home Demonstration Club employed Leroy Fries and Hyden Dietrick to build the stone wall in front of the shop in 1932-33 at a cost of $310.00. The entrance walls and columns were designed by Clarence Wenger, architect. The alumni association financed the last project and it was dedicated to E.R. Shank, Kate O'Conner and Lucius Fletcher. A bronze tablet with their names engraved on it was erected May 20, 1934 in memory of their faithful service.

More educational units were added to the Linville-Edom School property as follows: gymnasium, agriculture building and the home economics building. The gymnasium/auditorium was built in 1934 at a cost of $18,000.00. The alumni association solicited for donors to pay for the price of a chair and the Home Demonstration club added to this fund over $200.00. This cooperative movement furnished the chairs for the 1935 commencement that was held in the new auditorium.

The brick for the agriculture building was hauled by volunteer labor from the Simmers Valley School and the Little North Mountain School near Stultzes Mill in 1935. The Home Demonstration Club gave over $400.00 for the construction. They furnished meals for the men who were helping in the construction of the building. They gave $22.50 for a library unit that made available to the library $60.00 worth of agricultural books. The initial cost of the building was $3,000.00. In 1937 the school board spent $1,350.00 to install a community cannery in the agriculture shop. By 1943 an annex was built in which the cannery equipment was placed. The cannery continued in operation until about 1964, after which the building was used for a Sheltered Workshop for Handicapped Children until September 11, 1970, at which time the building was destroyed by fire.

The home economics building was constructed and ready for use for the term of 1938-39 at a cost of $4,000.00. This building was used to house the Trainable Mentally Retarded students taught by Mrs. Ruth Spitzer until the 1974-75 school year. It became known thereafter as "the Reading Cottage". The quaint cottage is presently housing the newly established (1996) preschool program for 4 year olds.

The members of the squad were:

Linville-Edom had another State Basketball Champion Team in 1930.

On a cold Sunday night, February 20, 1939, the Linville-Edom School's main building was completely destroyed by fire of an unknown origin. The firemen were able to save the other school units.

Plans for rebuilding were immediately put into action and in approximately one year the new structure was completed adjacent to the gymnasium. The cost of the building was $113,000.00 and equipment $18,000.00. During the hectic year of construction Principal A.J. Parr assigned and directed the 325 pupils, housed in the home economics department, in the agriculture department and in temporarily constructed room in the gymnasium.

The Singers Glen High School department was discontinued at the end of the 1939-40 term and merged with the Linville-Edom School the following year.

The Linville Ball club played their home games on the high school baseball diamond. They named their team the "Linville Patriots". Under the leadership of Dr. G.W. Rolston, the infield was raised about 3 feet and a stadium was built. Lights also were installed. The Linville-Edom facilities were named the "Ruritan Park". Later more land was purchased from Joe Miller for the purpose of extending the park and recreational area into the Beard Woods. In 2006 the stadium was taken down.

The Linville-Edom Ruritan club was organized in 1937 and held its meetings in the local school cafeteria for around 60 years. The club donates funds to the school annually for educational and playground equipment.

Since consolidation Linville-Edom School has served elementary school students. The building went through extensive renovation in 1992-1993 including the addition of an elevator.

The Principals of the Linville-Edom School from 1912 to the present are as follows:

Those who served as Superintendent of Schools in Rockingham County were:

This history of the Linville-Edom School was prepared by Mr. and Mrs. Paul G. Kline of Edom, Virginia. We gratefully acknowledge this fine work by Mr. and Mrs. Kline, educators, authors, artists and very good friends of our school.
Back to LEES Home

LEES Home | About Our School | Faculty and Staff

Calendar and Schedules | Events and Announcements