The Great Gatsby is captured through Nick Carraway, a middle-class working man, who goes through and experiences many different scenarios between various classes of society. Throughout the story, there are plentiful amounts of conflict between the rich and the poor and even between the rich and rich, differentiating themselves by ‘new money’ and ‘old money’ and because of these internal and external disputes between characters it proves the Marxist theory. In The Great Gatsby, characters from different classes interact through verbal and physical conflict. From a Marxist perspective, this is critical as people of different classes are believed to never be able to get along.

Characters in the Great Gatsby interact through physical conflict. Throughout the story, there are many affairs between them that lead to many heated disputes. Tom Buchanan, extremely wealthy and husband of Daisy, had an affair with Myrtle Wilson, wife of poor and struggling George Wilson. At a small get-together, they get drunk and begin to bicker after Mrs. Wilson repeatedly says Daisy's name after Tom asks her to stop. In the end, she is left with a bloody face and a broken nose. "I'll say it whenever I want to! Daisy! Dai---' Making a short deft movement, Tom Buchanan broke her nose with his open hand" (Fitzgerald 37). Here, there is clear physical abuse from Tom, the elite, and the more wealthy one of the relationship. In addition, the fact that he did that in front of everyone leaves a thought that this wasn't the first time something like this has happened. Even later in the story, the tension between characters became even more intense, leaving some dead. After Gatsby, also extremely wealthy, murdered Mrs. Wilson in a hit and run, George sought out his revenge, killing Gatsby and himself. "It was after we started with Gatsby toward the house that the gardener saw Wilson's body a little way off in the grass, and the holocaust was complete" (Fitzgerald 162). It was important the author included the phrase 'holocaust' illustrating the mass destruction and trauma these characters caused between themselves. With them not being able to live without mass conflict, it proves the Marxist theory that the root of problems is because of class differences.

Characters in the Great Gatsby interact through verbal conflict. With there being a lot of physical altercations, there also have to be verbals ones as well. New money and old money are a big topic in the book as while they both mean wealth, but old money is looked down upon. Tom and Daisy both come from wealthy families and have known the feeling of being rich all their lives. On the other hand, Gatsby grew up poor and found an illegal way to make money. This is the reason Daisy would eventually reach her senses and choose Tom over Gatsby for the second time. "He and this Wolfsheim bought up a lot of side-street drug-stores here and in Chicago and sold grain alcohol over the counter. That's one of his little stunts. I picked him for a bootlegger the first time I saw him, and I wasn't far wrong" (Fitzgerald 133). Tom of old money and Gatsby of new money's clash also contributes to the Marxist idea that class is why people cannot get along.

Physical and verbal conflicts between characters of different classes is how they interact. While there are small amounts of good moments between them, it is overwhelmed by the amount of bad. Through a Marxist perspective, class difference is the cause of most of the problems we face today and the work of Fitzgerald and the plot proves this theory.

We strive and struggle in hope of success

Let down we become when our best isn't good enough

That dream we dreamt now seems to be a fantasy

Left with a crushed spirit dried like a raisin

We are the poor, the workers, the disadvantaged

Taught that with hard work and determination we can be someone

Many have failed chasing unattainable dreams

But many who have succeeded through luck and good fortune

All common occurrences and phenomenons today

How can we truly believe this is the land of opportunity

Withered petals of a plant full of life

Is now the people of America

Is the American Dream

I decided to write about the falseness of the American Dream and the limits of it through a poem. I used some figures of speech to convey my thoughts and get my point across. I truly believe the American Dream is unachievable in this day and age which is why I chose the 1st question to respond to. 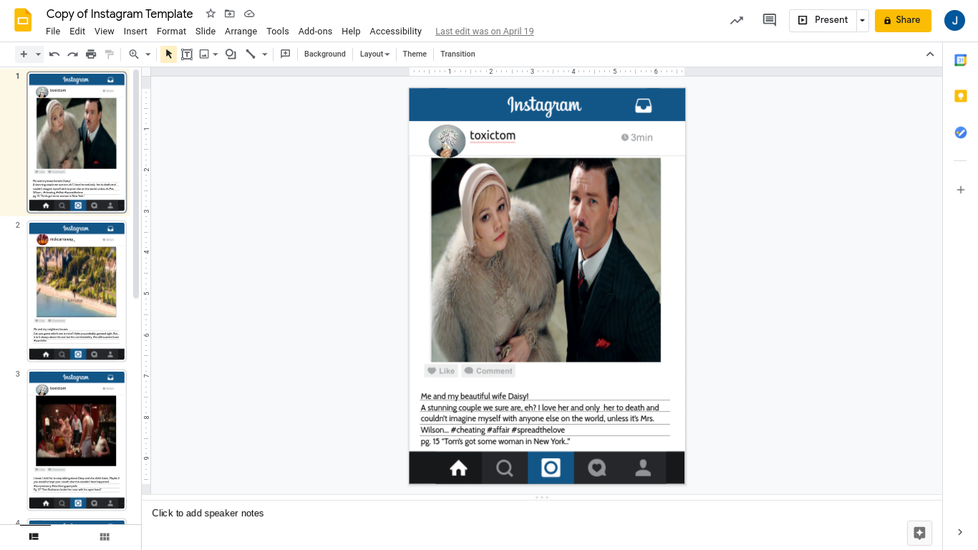 Here, you can see I created the social media memes response to chapters 1-3 of the book. I captured some of the most important events that happened throughout them such as Tom's affair, Tom abusing Mrs. Wilson, and Nick meeting Gatsby for the first time, and more. I mostly used the actual scenes from the movie version of The Great Gatsby for these moments in the book to accurately represent them. 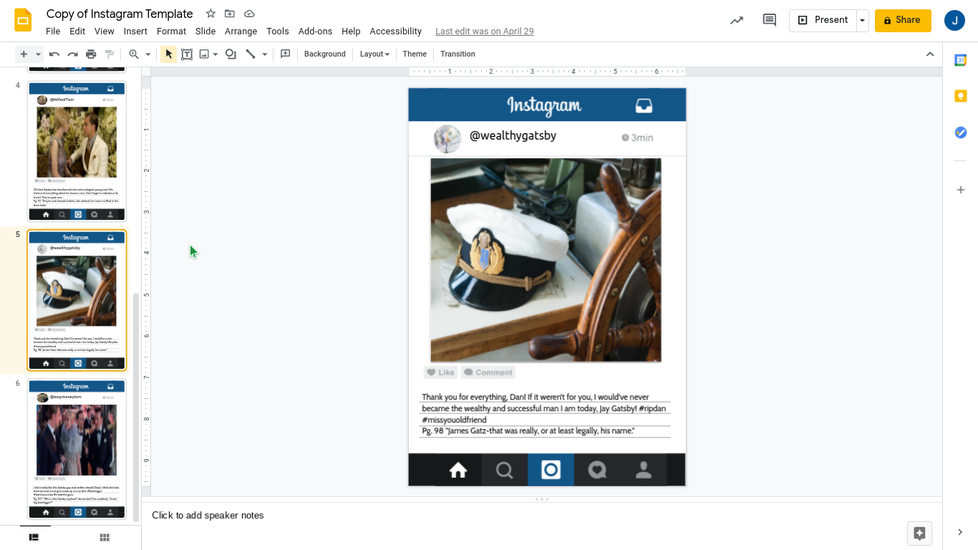 Here, again you can see I used the social media response for chapters 4-6 of the book. I captured the funniest and crucial moments in the story's plot such as Gatsby's true background, him being nervous after meeting Daisy for the first time in years, and the tension between Tom and Gatsby. I also used some scenes from the movie version to illustrate these events.
Embed code is for website/blog and not email. To embed your newsletter in a Mass Notification System, click HERE to see how or reach out to support@smore.com
close