DHS Students, Sydney Coldren and Louisa Williams, and DMS student, Kendal Coldren compete with the best in the tri-state area!

Tonight's big winner was DHS Junior, Sydney Coldren. Not only did Sydney earn a full scholarship to Harrisburg University of Science and Technology, she also is invited to compete at the Pennsylvania BioGENEius Challenge in Harrisburg, PA on April 25th at the Harrisburg University Main Campus. Sydney was one of 13 students recognized this evening in her category.

8th Grader, Kendal Coldren, was recognized during the Middle School Category Award Ceremony as an Honor Mention winner in Botany. Kendal was one of 24 students competing for this prestigious award. 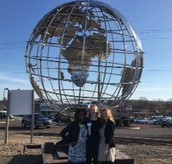 The competition includes multiple interviews by judges chosen by Drexel University in their fields.

What's next? Sydney will compete in the Pennsylvania BioGENEius Science Fair in Harrisburg, PA on April 25th

What is the Delaware Valley Science Fair?

Delaware Valley Science Fair is one of the oldest and largest fairs in the country. These fairs, designed as a vehicle for stimulating interest in Science, Technology, Engineering and Mathematics (STEM) among students in middle and high school compete from NJ, PA and DE. DVSF provides an opportunity for students to demonstrate their intellectual curiosity and creative problem solving - essential skills for future innovation. Students are awarded, scholarships, cash prizes, and other non-monetary recognition for outstanding work. Over $2,000,000 in awards and scholarships is awarded annually.