Nancy Cruzan was in an automobile accident January 11th, 1983, she was sustained for several weeks. The car accident left her in “persistent vegetative state” that means that the patient is completely unresponsive and is being kept alive only by medical intervention which was a feeding tube. Cruzan’s parents tried to end her life support system, but the hospital refused without court approval.

The 14th amendment states that no person can have life liberty or property without due process of law. So was taking Nancy off life support considered constitutional? 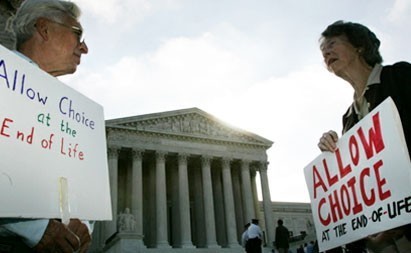 The Missouri Supreme Court ruled in favor of states policy over Cruzan’s right to refuse treatment. In a 5/4 court decision. The issue was whether the state had “clear and convincing evidence” to take Cruzan off life support. Once they denied the case the family went back and found more evidence that Cruzan wanted to be taken off. They eventually won a court order and Nancy was removed from life support. She died 11 days later on December 26th, 1990.