Get email updates from Kathryn:

Along with plants, animals have to adapt to their environment as well. In the Euphotic zone of the ocean many of the animals use camouflage, counter illumination, or coloration as their adaption. One example of an animal that uses counter illumination is a sea turtle. The sea turtle has a white stomach so that when a predator looks up from below, the sea turtle blends in with the top of the ocean as the sun hits the water. Another animal that escapes from its predator is a stonefish, it does this with camouflage. This means that it can blend in with coral, rocks, or anything on the ocean floor. Down a little deeper is the Desphotic zone. At this level, there is little light so animals have to adapt differently. They often use Bioluminescence where parts of their bodies can glow. A good example is the jellyfish. Some animals also have big eyes to help them see in the dim light such as a puffer fish. Other animals have dangerous spines or poisonous venom for protection. Finally, at the oceans bottom, is the Aphotic zone where there is no light at all, here most animals use bioluminescence to lure their predators in. An Angler fish does exactly this, and when it predator gets close enough it takes a big bite for a tasty snack! All in all, even the most dangerous animal in the ocean have a predator, and these adaptations will help many to survive. 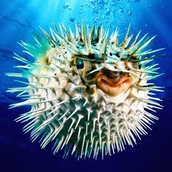