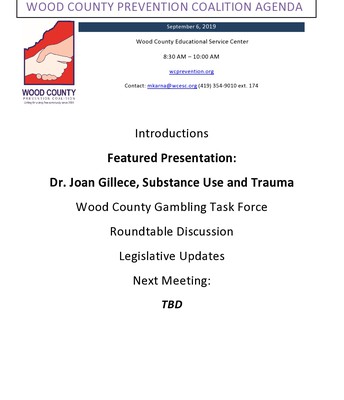 The third Wood County Prevention Coalition meeting of the year is set to take place at the Wood County Educational Service Center, 1867 N Research Dr, Bowling Green, OH 43402 this Friday, September 6th from 8:30-10:00 AM. The featured presentation will be from Dr. Joan Gillece, who will be presenting on trauma and substance use.

To view or print the agenda, please see the picture below or open and view the attached pdf below the picture. 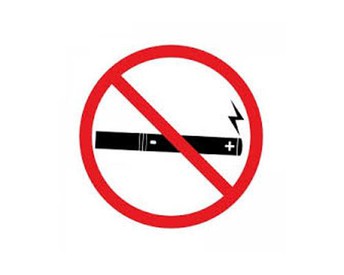 Michigan on Wednesday became the first state in the nation to ban flavored e-cigarettes, a step the governor said was needed to protect young people from the potentially harmful effects of vaping.

Gov. Gretchen Whitmer (D) said in an interview Tuesday that she ordered the ban after the state health department found youth vaping constituted a public health emergency. The action was officially announced Wednesday.

“My number one priority is keeping our kids safe and protecting the health of the people of Michigan,” Whitmer said.

Whitmer complained that e-cigarette companies are using sweet flavors, such as bubble gum and “fruit loops,” to hook young people on nicotine, with potentially adverse consequences. Besides sweet flavors, the prohibition will also apply to vaping products that use mint and menthol flavors. It does not cover tobacco-flavored e-cigarettes, the governor’s aides said.

The ban, which covers both retail and online sales, will go into effect as soon as the health department issues rules, sometime in the next 30 days. It will last for six months, and can be renewed for another six months, according to the governor’s aides. In the meantime, they said, the health department will develop permanent regulations banning flavored e-cigarettes. The legislature could try to block those rules, but would face a veto, they added.

Whitmer also barred what she called misleading descriptions of vapor products as “clear,” “safe” and “healthy” and ordered the enforcement of an existing ban on billboard advertising for e-cigarettes.

While Michigan is the first state to prohibit sales of flavored e-cigarettes, several cities and communities have moved to restrict or ban sales of e-cigarettes. In late June, San Francisco became the first major city in the United States to ban the sale and distribution of all e-cigarettes; the ban goes into effect early next year. 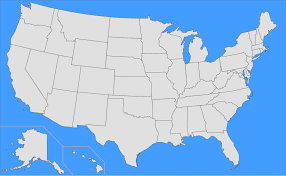 WASHINGTON -- The Trump Administration announced $1.8 billion in grants to state and local partners to help respond to the opioid crisis.

During a press briefing Wednesday at the White House, President Trump stated that "nothing is more important than defeating the opioid and addiction crisis."

The funds were appropriated by Congress in 2018, and will expand access to medication assisted treatment (MAT) and mental health services, as well as support state and local government in gathering "high quality, comprehensive data," Trump said.

The administration is ready to use "every resource at our disposal to smash the grip of addiction," he stated.

During a Wednesday press call, Alex Azar, secretary of the Department of Health and Human Services, credited the president with helping to reduce opioid prescriptions by 31%; with increasing the number of Americans who receive MAT by 38% (from 921,000 in 2016 to 1.27 million in 2019); and with a 378% increase in naloxone prescriptions.

Azar said "we are truly headed in the right direction for the first time since this crisis arose," pointing to a 5% nationwide drop in "provisional drug overdose death counts," and calling it the first such decline in 2 decades.

Azar outlined the two main funding streams: $932 million in State Opioid Response Grants from the Substance Abuse and Mental Health Services Administration will target all 50 states and several territories, and will be used to help communities in delivering prevention, treatment, and recovery services, Azar said.

"That can mean everything from expanding the use of [MAT] in criminal justice settings, or in rural areas via telemedicine, to youth focused community-based prevention efforts, recovery supports, like employment coaching, and support for the distribution of naloxone," he added.

A core criteria for eligibility of the grants is that treatment providers must make MAT available, which Azar called "the gold standard of treatment for opioid addiction."

Addiction & the Brain- For Kids

Addiction & the Brain - For Kids!

The 3rd coalition meeting of 2019 is set to take place on Friday, September 6, 2019 at the Wood County Educational Service Center. Please see the flyer above for more information, a downloadable pdf is also attached.
Get Directions